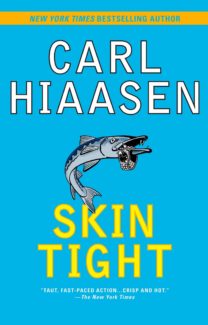 Earlier last year, I stretched out on the beach for a much-needed de-stressing vacation and grabbed the nearest Carl Hiaasen, ready to return to his wacky world of corrupt Floridians, con-artists, gangsters galore, and slap-stick murder. In Skin Tight, ex-cop/investigator Mick Stranahan has hung up his Glock to retire to Stiltsville, out in the ocean, where he can spend his days blissfully alone, caring for a giant Barracuda and fishing. This also means being far away from his continual spree of bad marriages (five in and counting) and away from his not so clean past as an investigator. Unfortunately, an old missing person’s case, a vengeful surgeon with a scalpel to grind, an assassin with some serious skin problems, and a Geraldo Rivera-like journalist with a keen nose for cover-ups and on camera beatings are all circling vulture-like, ready to descend on his hard-won peace. It kicks off with an inept assassin (one of many) and as the past barges back in Mick must finally figure out what happened to Victoria Barletta and her nose-job gone bad from famous, overpriced plastic surgeon Rudy Graveline.

Hiaasen has long been a favorite of mine since my hubby’s parents introduced me to his sarcastic flamboyance and over-the-top shenanigans. Skin Tight starts with the usual weirdness – Stranahan stabbing his would be assailant with a mounted Marlin. Yet somehow the usual verve is missing. Partly, Stranahan, main character as he is, is not abundantly sympathetic. He is largely one dimensional. As the stereotypical hard bitten-cop with a record for failed marriages and a penchant for misanthropy, he doesn’t pull at our heartstrings. But then again, this isn’t the usual modus operandi of Hiaasen anyway, who relies mostly on the absurdity of his story and the cleverness of his characters to draw in readers. Still, Stranahan feels more like a plot device than a man and what we do see of him is all outward – his intellect and scheming – but rarely anything that points to the soul beneath that semi-unethical tough-cop, I’ll-break-the-law-how-and-when-I-need veneer. 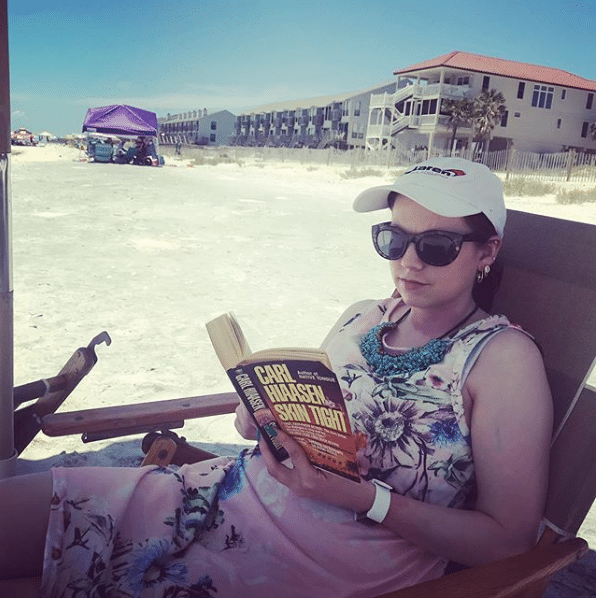 Yours truly, last summer, doing what I do best.

The story too, other than the addition of Chemo, my long-time favorite, reoccurring Hiaasen hitman, doesn’t have the usual originality of a Hiaasen tale. Partly I just wondered if my lack of investment was a mood, yet Hiaasen usually manages with minimal effort to draw me into his sordid little world and make me laugh and cringe irrespective of personal moods. His stories are simply all consuming, if a bit repetitive at times. But here, we feel like it’s all been done before and the pacing is somehow off – altogether too much slow set-up for what is mostly a smallish, focused issue – Graveline’s attempt at a cover-up and his general surgical bungling and inability.

In Skin Tight the strength is in the side characters’ stories – the crooked ambulance chaser lawyer who knows nothing about law, Chemo’s various physical mishaps and workarounds (including a prosthetic appendage made up of a weed whacker), and Renaldo Flemm (the Geraldo Rivera knock-off) and his schemes to once again get gloriously pummeled on camera. This is where the moments of true hilarity ensue and where characters who are vibrant and compelling emerge (even if they are definitely not the good guy). Take this as a startling contrast to Stranahan, our one-dimensional hero who is never really amusing or even likable but is inevitably able to foil all schemes directed at him. He outsmarts the villains, but we tend to like and root for the villains more. The story and its strengths, after all, reside with the baddies here.

The ending doesn’t bolster the reader’s waning enthusiasm. Indeed, it’s rather flat and unnecessarily gruesome. Stranahan’s built-up romance falls flat, which is entirely realistic but ultimately unsatisfying. The heroes win easily, the villains are suitably and quickly dispatched, and it all smacks of a last-ditch effort to tie-up plot threads and meet a page-count. Every story must end, and so it does just that: ends abruptly and with none of the usual elegance.

Not to say that Skin Tight is a bad book – it isn’t. It’s just not memorable compared to some of Hiaasen’s other offerings. I would read it for a while and then, in the glorious pile of all the books I read at once (usually around 10 to 15) I would simply forget I was reading it, only weeks later to see it lying abandoned somewhere. The story just didn’t grab me, and while it was fun while I did read it, I was never really engaged. For those seeking out Hiaasen at his best, I recommend starting with my two personal favorites Bad Monkey and Skinny Dip. Others to keep on the radar and follow-up with include Strip-Tease, Nature Girl, Native Tongue, Razor Girl, and Star Island. Skin Tight is still worth a read, especially for anything and everything Chemo related, but it’s not Hiaasen’s best. Start elsewhere in the collection and work your way to Skin Tight. Treat it like the afterthought it feels like.