Size 14 Is Not Fat Either 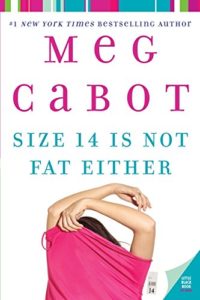 What You Get When You Combine Headless Cheerleaders with Cozies

Back to Death Dorm for another season of sinister schooling, fallen teen pop hero Heather Wells is back for another hilarious, and surprisingly grisly, encounter with a killer. Grappling with boyfriend issues (i.e. she lacks one), weight issues (size 12 is the average size of the American woman people!), and whiney students with a penchant for everything from pranks to secret societies, it’s a busy season. It’s about to be kicked off in an especially rough way too. While Heather is hopelessly flittering with the barista at her favorite coffee shop up the road, the school’s cafeteria staff are making a grim discovery in a suspicious simmering pot.

Perky cheerleading star and overall college favorite, Lindsay, has lost her head – literally. Found in quite a stew, this friendly cheerleader is short one body meaning that this semester a psychotic killer with a vendetta is on the loose. He also might have a flare for the bizarre.

With police being deliberately absentee and missing all the real clues, it’s up to Heather, with constant prodding from the devoted Magda to clear Linday’s name as “just one of those lose girls” and bring a murderer to justice. Along for the ride ex-fiancé and soon to be married Jordan Cartwright, celebrity singer and grade A whiner, is diminishing Heather’s chances at a subtle investigation. Even worse, his presence is getting between Heather and her secret crush – the black sheep of the Cartwright family and her landlord – Private Investigator Cooper.

Armed with curiosity, plenty of lattes, and a desire for justice, Heather is about to suss out her most gruesome crime yet as New York is blanketed in perilous snowfall. Even her friendly neighborhood drug dealers are worried about her new venture into the dark heart of crime.

So . . . was it the boyfriend, the school coach, a jealous roommate, or someone else? Second in the sidesplitting Heather Well’s cozy mystery series, Size 14 is not Fat Either is actually my third experience with a series (and an author) to which I am becoming dedicatedly attached. Heather is funny, snarky, vulnerable, and strong all at the same time making her the perfect complicated heroine. Her rock star past, which I originally feared would be a distracting gimmick, lends an aura of sympathetic melancholy to the stories. Heather certainly isn’t down and out, but she’s hurting from family betrayal and loss of love. Yet she keeps going, and keeps caring. Her dedication and ability to see the funny (or at least sarcastic) side of life pulls readers in. The laughing isn’t just for kicks. It makes us bond, permanently, to this vivid, weird little collegiate world set in the Big Apple.

Surprising cozy fans everywhere, Meg Cabot takes a decidedly gory turn in Size 14 is not Fat Either. Starting as it means to go on, this no bones about it cozy declares itself just as tough as a hard-core mystery. We have a severed, cooked head to get things rolling within the first three pages and that is nothing compared to what we eventually discover happened to the rest of the body (note – never eating chili again and never eating in a college cafeteria again…) It’s a bit much I admit. In my teenage days I had a penchant for splatterpunk and extreme horror carnage. Older, and seeking some solace in a mystery that can combine grit with subtlety into a provocative but not depressing mélange, I was turning a few shades lighter when the rest of the body appeared. It doesn’t hurt the mystery and in some ways the inventive gore even makes it more memorable, but frankly, I prefer the other editions in the series. Heather Wells has always had a tendency to be a bit morbid for a cozy, which has also upped its performance as a tension inducing mystery, but it could back down from this level a bit.

Nevertheless, the clues are steady and the killer’s identity shrouded in layers of misinformation, deceit, and secrecy. Heather’s journey to discover the culprit while hopefully sorting out her own ever complicated family life (a long lost parent enters the story) is at turns endearing, suitably perplexing, and tense. Interspersed are the usual tidbits of bad song lyrics from Heather’s secret midnight sessions and ruminations on what weight really means in American culture.

Coming in for the finale, however, the accelerated pace of this gruesome little goody is a bit spoiled by the anti-climatic, dare I say campy conclusion. It doesn’t ruin the verve of the mystery (and I must say the Heather Well’s series is one of my top favorite go-to cozies) but it’s not the best offering from this peppy heroine. Other books in the series such as Size 12 Is Not Fat and Big Boned are the best with this one a close second that still pleases without getting the usual stamp of absolute perfection. Still, this novel is undoubtedly a grade A cozy with a heart.