Size 12 and Ready to Rock 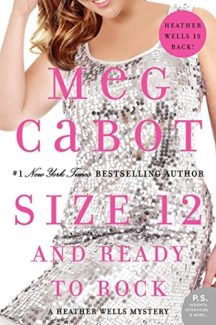 For Those About to Rock: You May Die

Summer may be in full swing, but assistant dorm-director and now secretly engaged, Heather Wells is hardly getting a break. Fisher Hall (aka, the delightful Death Dorm) is getting a remodel to help with all that bad press, and student volunteers are taking full advantage of the building’s under-construction status for everything from Paint Ball wars to beer parties. Meanwhile, Heather’s unfaithful ex-boyfriend, and also her soon to be (unbeknownst) brother-in-law, Jordan Cartwright, is winging around with his fancy new wife in-tow, pop music star Tania Trace. When making a reality TV show, however, becomes a recipe for homicide, it becomes clear that Tania needs a safe haven and Jordan can only think of one place where she can continue her career in peace: Fisher Hall. Soon the former Death Dorm is turned upside down for a reality show/rock camp and infiltrated by 13 to 14 year-olds with attitude and one very determined killer.

Hired by his own father, black sheep Cooper Cartwright, Heather’s landlord and fiancé, is doubling as a body-guard and investigator to protect the family name and fortune, specifically, Tania. Doubling as a sympathetic shoulder and a wannabe amateur sleuth, Heather, however, is the one who gets to the true sordid heart of the mystery. The thing is – by the time Tania opens up about her buried past it may already be too late.  Filled with laughs, hysteria, murder, revenge, moving-on, female empowerment, and sarcastic pop lyrics, Size 12 and Ready to Rock once again returns readers to the verve of an energetic, and distinctive world.

After a stint of grisly murders and raucous college shenanigans, Size 12 and Ready to Rock is a distinctively different feel for the Heather Well’s series. The narrative revolves around a homicide (not a string this time) and the sleuthing is secondary to the character development of Tania and the author’s empowering, and-you-too-can-get-over-this message. It’s nice (especially since Heather Wells can at times be a little ghastly for an otherwise endearing cozy), yet after the opening scene of Paint Ball pranks and the prior three books involving  everything from student cults and elevator surfing to dead bosses and grisly garbage disposal finds, readers are expecting the usual focus on the life of the college: the student body. The students, however, are mainly replaced by Tania’s young co-horts for the rock show, and even these pre-teen primadonnas don’t get that much page space. This time, it’s all inner family secrets and reveals, with Jordan and Tania being more than just side characters, brought up to contrast with Heather’s lack of success. It’s interesting, but certainly not as edge-of-the-seat as the other mysteries or quite as entangled. Maybe that’s because the pacing here is more leisurely or perhaps it’s just the distancing concentration on the star-side of Heather’s life as averse to the more relatable at-the-job moments.

As the narrative develops, admittedly slowly, especially for a Heather Well’s mystery, Cabot takes on a more personal stance, as averse to the usual discovery of a sick coven of sociopathic killers with an axe to grind (sometimes, literally). Don’t get me wrong, the killer is still an unsympathetic and monstrous individual, but Tania’s backstory, specifically the abuse she endured, is used not so much for plot device but as a way for the author to advocate active healing, empowerment, and the strength to call-out abusers. So, even though no one is ground up in a garbage disposal this time (thankfully), the book has a deeper gut punch to it without the same “oohh” and “ahhh” thrill of Heather’s faster paced, less directed mysteries.

In the conclusion, we’re delivered not only danger, but a solution both in life and in the emotional realm that once again, sends a message. Tania, despite what everyone knows Heather caught her doing with her at-the-time-boyfriend, actually ends up being a character that readers like and admire – dare I even say care for. That in itself is unsuspected and shows Cabot’s writing talent and the vividness she employees when drawing her characters.

Nevertheless, Death Dorm as a reality rock camp and the concentration on personal back-story still isn’t quite as funny or engaging as the other Well’s mysteries. Size 12 and Ready to Rock is still an enjoyable read and compared to other cozies out there a 5+ star effort. For Heather, however, this is probably my least favorite of the series which just goes to show how much this series rocks, because I laughed along with this novel and was fully engaged, only slightly distracted by a longing for more dorm time and less reality show slowness.