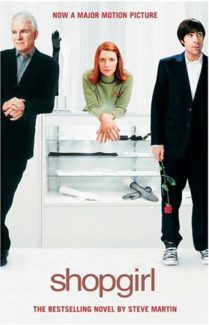 Back to my dwindling supply of hodge-podge books from a long-ago eBay lot, I encountered Steve Martin’s Shopgirl and instantly talked my husband into listening to it. It’s Steve Martin – one of my favorite comedians – and I’d just introduced Trav to Father of the Bride in preparation for our impending nuptials. Shopgirl, however, isn’t what you expect. Starting out with a lilting sarcasm, the drama soon follows the sexual misadventures of Mirabelle, a lonely shop girl who has bounced from one dissatisfying relationship to another and is now seeking solace in a much older, and far more selfish (albeit upfront) man. The story shifts from witty repartee on Niemen Marcus and lazy dates to something attempting a brooding relationship psychoanalysis with the plot (at least as my husband says) showing how people learn and grow through relationships. I have my doubts. . .

This was one of the few books that we were actually divided on, with Trav appreciating the forgiving nature of the narrative and me genuinely upset by the seeming callousness of Mirabelle’s disappointing paramours. Now, we almost always agree on books (or any sort of entertainment), so this got me thinking. Doing a little reading around the Internet I found a review that hit it spot on – to the reviewer, it was a woman’s story obviously told by a man, with the types of feelings and practicality more typical to a masculine perspective. This was certainly true to me. I did get emotional about the narrative and the way men use women and women use men, and people use people, etc.  because Martin obviously wanted me away from the comedic and into a contemplative “what does this mean, why do we do what we do, and where do we go from here” state. Fine . . . but . . . this was difficult when Mirabelle and her two key lovers seemed so undefined. The characterization was sacrificed in order to have what I call smart-book syndrome, and while the concepts and applications to life are broad, overarching, and intricately examined, there’s no individual character pull here, or individuality at all. Mirabelle could be any lonely woman and her men can fit into any type of stereotypical man. To me, this was the biggest disconnect. Trav liked what the book was saying, where it was going, the intricacy of human existence but I wanted this story to be less universal and more tied to a specific character or group I could, if not route for, at least feel compelled to believe in.

Shopgirl also has a distinctly depressing feeling. Perhaps (ok, most likely) if I hadn’t seen Steve Martin’s name appended I wouldn’t have gone into the book so loaded with an expectation to be hysterically laughing and reliving the Father of the Bride high I’d recently indulged in. Fair? Nope, not at all, but this colored my perception and enjoyment of the book right through from beginning to end. Trav was able to let go of perception to enjoy the book for what it is, but I was too hung up in my expectations and despite trying, couldn’t shake them. A character to anchor to . . .well, that would have helped.

A lot of reviewers (both professional and volunteer) mention a tenderness and romance inherent within Shopgirl that I just do not see. Here’s where I’m probably going to reveal my own fallibility, or prejudice, but the casual sex, no-one-to-love, emptiness of the novel with “relationships” merely being hookups that continue on due to inertia, boredom, or some unspoken desperation on the character’s part, just made me plain sad. Is this what the modern world has come to? Is this the epic of modern romance? Eventually having enough one-night-stands that someone just sticks (mostly because the book needs an ending). Of course, despite my penchant for loving horror movies and proudly swearing like a sailor, I’m an old-fashioned girl at heart, so my own prerogative and outlook (some might say judgementalism) held me back from enjoying the book. But also, perhaps its just because it reminded me of the pain from a woman’s perspective and the dulled nature, the way the book steps in and around this nameless longing, brings up sad memories in and of itself and takes us through one of the bleaker aspects of human interaction, leaving readers at what feels like an abbreviated and unrealistic ending.

What Mirabelle learned was too quickly and conveniently summed, her answering soul-mate provided with such speed (and predictability) that the ending feels fake, the long-going philosophical discussion unfished, tarnished with a high-speed fairy-tale ending that doesn’t leave a lot of hope for the regular chap out there. In the end I was glad to close the book. Trav (aka the hubby) found something beautiful and forgiving in it, partly due to his own sweet nature and generally optimistic outlook on life. I, however, did not. And so, Shopgirl really depends on how you approach it, how you already feel about the issues it arises, and how tied you are into talking over issues versus bonding with characters.