Sense of the World, A

Have cane, will travel… 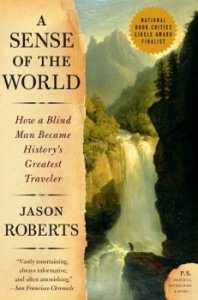 Humans have been explorers since the dawn of time. Ever since our Homo sapiens ancestors ventured out of Africa some 70,000 years ago we have displayed a seemingly unquenchable drive to explore every corner of our planet.   From the Phoenicians and the Polynesians to the prehistoric colonizers of North America, humans have been unstoppable, often despite overwhelming adversity. That drive has continued into modern times, in the form of celebrated heroes like Marco Polo, Magellan and Captain Cook. But despite countless generations of daring adventurers, there may never have been a more remarkable explorer than James Holman, a sickly, blind man from Exeter. In A Sense of the World, author Jason Roberts tells his incredible story.

Enlisting in the British Navy at age twelve, Holman spent his brief naval career serving during the Napoleonic Wars and defending the British crown’s interests on the shores of eastern North America following the American Revolutionary War.   However, his service was cut short due to the abrupt onset of incapacitating arthritis and a rapid deterioration of his vision in his early twenties. As his vision failed, he returned to his native England, retiring from service on a small pension and with no obvious way to support himself. But despite his poor health, blindness and limited finances he still had an overwhelming desire to explore the world. 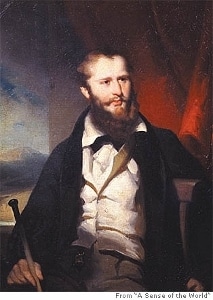 Armed with a stout walking stick, a sturdy pair of walking shoes and an incredibly astute sense of self preservation, Holman proceeded to explore the entire globe. Climbing Mount Vesuvius during an eruption, fighting the slave trade in West Africa, hunting rogue elephants in Ceylon and exploring untamed wilderness on horseback in Australia, Holman pursued adventure purely for adventure’s sake, never turning down an opportunity or letting his blindness limit his ambition. While he would accept assistance when it was available, he often preferred to explore on his own, relying on his own wits and his non-visual senses to keep himself out of harm’s way.

Holman eventually became famous as “The Blind Traveler” and he went on to publish accounts of his travels to significant acclaim, even contributing observations that were subsequently used by scientists and naturalists that followed in his footsteps.   Yet despite his successes, there were many critics who vigorously contested the idea that a blind man could actually be a legitimate explorer.  And it’s on this topic that Holman’s saga becomes much more than a unique adventure story. The author’s extensive discussion of how blind people experience the world and how sighted individuals mistakenly dismiss their perspective – not just visually, but emotionally, intellectually, even sexually – is the highlight of the book.

In his first book, author Roberts has created a truly engaging story. Compiling essential information from relatively scant primary sources, he deftly captures Holman’s unique fortitude. Roberts’s successful and compelling resurrection of this great adventurer from the dustbin of history is worthy of the numerous awards and commendations it’s received.

Was Holman a great explorer whose grit and determination allowed him to succeed despite his blindness? Or did his blindness actually make him a greater explorer who was able to experience the world in ways that sighted individuals couldn’t? These are the kind of fascinating questions that A Sense of the World so compellingly examines. Much more than an entertaining and well written biography of a great adventurer, the book thoughtfully delves into the myriad ways that humans experience the world. Highly recommended.

Thanks to author Sam Kean who enthusiastically recommended this book.