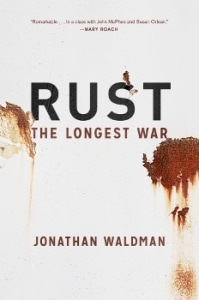 Sometimes you can tell a book by its cover. Over a lifetime of reading, I’ve seen it both ways, having enjoyed a book entitled Sand and loathed a book called Dust. Despite my previous mixed experiences with monosyllabically titled geek books, I approached Rust with optimism. Disappointingly, journalist Jonathon Waldman’s exploration of the world of corrosion and metallic decay is about as entertaining as it sounds.

You may not realize this as you live from breath to breath, but oxygen is the enemy of much of our civilization. Anytime humans have attempted to use metals to further there technological ends – iron being the most commonplace example – air or water borne oxygen immediately starts to tear down what has been wrought. The end result is rust, in the case of iron, or more generally, corrosion, in the case of other metals. Since the dawn of the Iron Age, humans have fought a constant battle against the ravages of rust, which can quickly sap the effectiveness of metal tools – from swords to plowshares – or dangerously weaken buildings and other structures. Waldman summarizes what he calls “the longest war”, revealing how engineers have only recently begun to gain control of this conflict between metal and the environment with the invention of weapons like stainless steel, rust resistant paints and galvanization. 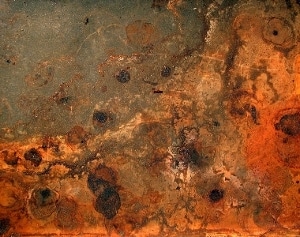 Traveling the world, the author spends time with an assortment of corrosion engineers as they go about their business trying to make sure the things humans build – from bridges to airplanes – don’t deteriorate too quickly. Despite the importance of this work, this engineering subspecialty is often underappreciated and underfunded as preservation of old things never seems quite as sexy as the creation of new and shiny things. Starting with a concise overview of the chemistry of corrosion Waldman goes on to explore a different deterioration topic in each of eleven chapters.

Unfortunately, interesting chapters about aluminum cans and the Statue of Liberty are outweighed by overly long and dull chapters about corrosion policy at the Department of Defense and the constant struggle to keep the Trans-Alaskan Pipeline intact and flowing freely.  There’s enough interesting material here for a good National Geographic article or two, but not enough for an almost 300 page book. It’s not that rust is an inherently uninteresting topic and it’s not that Waldman doesn’t have writing skills; it’s primarily that the author doesn’t prune away enough unnecessary details, resulting in a book that is downright tedious at times.

It may not seem like much of a surprise that a book entitled Rust turns out to be boring. I guess it’s rather obvious in hindsight, but hope springs eternal for this bibliophile. When my fellow non-fiction book geeks hear of my travails they are quick to enthusiastically suggest alternatives like Stiff or Rain or Salt, giving me hope that dull titles don’t always result in dull books. Stay tuned and keep your sterling silver well polished.