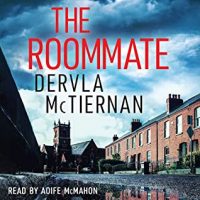 Niamh (Nia) is surprised. The Garda (Irish police) are swarming around her apartment building. Something has happened. She doesn’t make the connection between her roommate’s closed door and the chaos outside until the Garda come to her, asking questions. Her roommate, Maya, is dead. Someone murdered her.

Nia wasn’t really close to her roommate, but the news is still a life altering blow. On her own now, a little paranoid, a little disturbed, and not sure how she is going to make rent, Nia wonders about her roommate’s last moments. What really happened? Is the man who killed Maya still around? Is there a reason he might come back? It seems like a boon when a new woman, an affable one she meets incidentally, wants to be her roommate. Two is safer than one, after all.

But then strange things start happening at Nia’s work. People around her are acting weird. Little things start to go wrong. Is the person who killed Maya still around? Is there something wrong with the new roommate? Or has the entire murder transformed Nia into someone who cannot function anymore?

The Roommate was a free novella on Audible, and the premise looked interesting. I haven’t actually read the series with detective Reilly, who barely appears here, and so I came to the story not as a fan but just as a casual reader who wanted a good crime/thriller story. For this, The Roommate more than delivers, especially as a slender, fast paced novella that covers a lot of ground and atmosphere in a short amount of time. McTiernan captures a mood well, and while readers (or listeners) can figure out the killer and the “twist” fairly early, there is still a satisfying reveal with the requisite amount of danger and near-misses. This novella actually made me curious about the series that inspired it. McTiernan clearly has a talent for storytelling and creating a tense, all-is-not-right-with-the-world atmosphere. I would like to follow this fun sample by actually reading one of her novels.