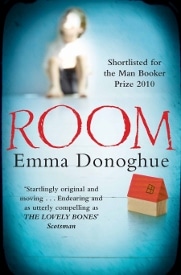 How big is your world? Are you a traveler, seeing as much of the planet as possible? Or maybe a home body who prefers to keep your circle of experience small and intimate? Whatever your chosen path, I guarantee you’ve not chosen a circle as small as that in Room.

Room is the story of exactly that: a room. This particular room contains two human beings – Jack and his mother. It is just them and this is the only place they are. For 5-year-old Jack, it’s the only place that exists. Occasionally Old Nick will come, but then he has to hide like his mother tells him until the man goes away. Jack and his ma have a TV, they play games and have exercise time, they count out their cereal to make it last and sometimes get treats on Sundays. They never leave Room because there isn’t any place else to go.

Emma Donoghue’s novel of a boy and him mother held hostage in a tiny space for years is told entirely from the point of view of 5-year-old Jack. He knows no other existence, and his mother has told him that the things he sees on TV are not real. For him this is all there is, and all there will ever be, and he isn’t unhappy, really. This is just the way life is.

But Ma knows differently and at some point the time will come when this existence is no longer viable. What will happen as Jack grows and Ma and Old Nick age? You’ll have to read Room to find out.

For the most part, Room is a compelling novel about an unimaginable circumstance. As farfetched as the premise seems, the news tells another story – or stories. The stories of women held against their will for months, years, lifetimes, right under the noses of neighbors, friends, and even families. Donoghue takes those stories and turns them around as we see life in one of these dungeons through the eyes of one of the children born there (and there have been many in real life). It works both as a piece of fiction as well as a terrible reminder that this kind of thing happens – in our world. And how the evil that men do warps and destroys the women and children upon whom it is inflicted.

The most interesting part of Room is also the part that eventually wore me down until I was really dragging by the end of the book. When we first meet Jack and Ma, it’s fascinating to see this tiny space through his eyes alone. As the story progresses, it becomes trying and annoying. I suppose this could further illustrate the incredible hardship of trying to preserve a life for a child under such circumstances, but I feel like it also gives the author permission to skip over complicated parts of the story because her narrator doesn’t understand them. It also allows her to let the feelings and thoughts of any other characters go unexplored except via the very concrete observations of a young child.

Though the POV didn’t entirely ruin the book for me, I think it’s something to be aware of when you begin – that child whose mind you’re in is a place you will not leave. Sort of like Room – you’re trapped there in his small world with his limited understanding. Know that going in and you’re far less likely to get frustrated. 3 stars out of 5.