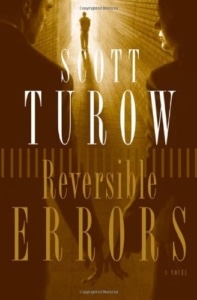 A grisly murder leaving three butchered in the freezer of a popular diner makes an immediate arrest and conviction essential. But now, years later, the death-row inmate, Squirrel, accused the diner drama, is making a last minute appeal and there might be new evidence proving that the law never got their man. Down-and-out Arthur Raven, regretting his forced appointment, is nonetheless willing to test the murky waters of criminal law to find the truth. Only the former prosecutor, Muriel Wynn, and her ex-lover detective Larry Starczek have a mutual stake in destroying Arthur and any evidence that could lead to speculation of foul play or a procedurally inept case. Throw in the wild card of a previous judge who convicted Squirrel, and is herself recovering from jail time due to drug addiction and bribery acceptance, and you have a small town tale with a big legal bite. Also, and notably less important, you have an old mystery and a silent killer, motive and crime blurring into the supposedly tense high-stakes realms of legal drama and court-room flair.

The fiancé and I discovered Scott Turow’s sixth book, Reversible Errors in the same way we always discover new authors: an eBay audiobook mystery lot. This time the back cover blurb was captivating in that the story combined mystery (one of my favorite genres) with legal tension/thriller aspects (one of the fiancé’s favorites.) The story itself started strong with a grisly murder underpinned by the who, what, where, and when questions that are the staple of hardboiled mysteries. The visceral gut punch, however, is then thrown aside and years later we have an inmate and a possibly foiled case, the gap exacerbating all that was left out. We don’t see the original conviction, the arrest, the courtroom, the case, just the dusty aftermath as the scope of many years hazes out the criticality of solving the crime. It’s all old news now and Raven’s own hopeless attitude at being handed a dead end case is more the coffee-and-donuts by the watercooler type mystery as averse to the heart pounding there’s-a-killer-on-the-loose countdown with haggard detectives hindered by complex legalities.

While readers feel apathetic toward Raven, who himself is too depressed and slow to be convincing, the antagonists foster a strangely dialed down hate. Prosecutor and detective are embroiled in their own pseudo romance, bringing in the entire cheating-remorseless-power-hungry spouse vibe which sadly takes more precedence than the story. We don’t care if Muriel and Larry ever get together or not and we feel sorry for the spouses fettered with such usurious, ladder climbing, amoral hypocrites. And yes, that’s what they are. Unwilling ever to be proved wrong on a case, Muriel and Larry team up to keep new evidence hidden, seeking conviction and execution of Squirrel to keep their career record squeaky clean with no procedural mistakes or investigation errors. Readers not only find Muriel and Larry strangely low-key lovers and lacsidasical impediments to Raven’s investigation, but also lacking in a true emotional resolve and a grounded reason for being in the way. Even they don’t seem to truly care but merely act and react as programmed, giving the story a strange mixture of general malaise covered by unrealistically steadfast yet emotionally uninvolved villains.

Eventually, with the addition of a crooked judge and the right questions, Arthur begins to get to the heart of the dank mystery and what has been left moldering for years is brought into the light. We finally get an excuse for the murders, but it’s an afterthought with procedure taking precedence over the entire who-done-it. The psychopathic killer is blasé as well, and the legal practicality makes the conclusion unsatisfying and distinctly not exciting.

It’s hard to pinpoint just what in Reversible Errors is so forgettable, yet the day after finishing the discs we had already forgotten details of plot and character. Surprisingly, this also included forgetting the ending confession of the murderer – which in and of itself seemed somehow oddly non-integral. Squirrel gets little page time and creates even less of an impression with the reader, so its all about the law and nothing about the people involved or affected. The story had the requisite beginning, middle, and end and structurally, you can’t knock it. Yet something, I’d hazard to say the soul, is missing and this tale becomes a bland contribution to the whole legal thriller genre. It’s not offensive but it’s not intensive or memorable either. Just bleh.