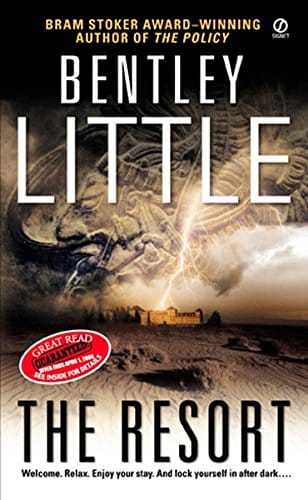 In the Desert, No One Can Hear You Die

There is no one who can take the ordinary – the everyday – and make it somehow malignant and putrescent quite like Bentley Little. The Resort is no exception. It begins with the Thurmans, a normal man and wife with their kids, going to a fancy resort in the desert. Admittedly, it’s off-season. But that means this unparalleled luxury is affordable. It ends with murder, ritualistic sacrifice, and a prescient place in the desert that restores itself out of carnage.

The Resort starts subtle. A mistaken double booking. A strange, unseen man yelling in a room. A gardener dancing malevolently in the moonlight. It’s just a shade off. Not quite scary – yet – but certainly disconcerting. And then we meet some of the other denizens of this fancy resort (properly named The Reata) and realize that there is a theme here. Something is very much not right in this place, and as the stay elongates, the incidents escalate until they can’t be shrugged off. But, of course, by then it’s far too late to stop the resort’s sinister purpose. And by then others have been consumed by the living nightmare and have seen the revelations in the rain now that it is too late.

Now, it’s more than fair to say that one Bentley Little book is much like another. He has a formula, a set of characters (yes, I’ve already forgotten their names) who are your everyman/woman with normal, day to day problems and foibles, and a big bad that prefers to sneak up stealthy in between the sunshiny rays of everyday. You read one Bentley Little book, and you’ve pretty much read them all. Yet . . . yet it’s just sooooo good. The way Little manipulates the world, hides the horrible in the everyday, has a powerful effect. I tend to read upwards of ten books at once, but once The Resort got started, once this bad vacation turned into hell-town-on-wheels got properly going, all my other books sat in a disused pile, and I was once again running down the weird labyrinth of Little’s perverse imagination.

The Resort is one of my favorite Little stories so far. Little at his best is powerful, and he is in form here. The way that he engineers the character’s mass denial works with logic, not against it, and the final reveal is suitably bizarre and (of course) savage. If you’ve got triggers, well, Little is just not for you. From giant creepy spiders to amplified abuse to rape and murder to ritualistic sacrifice, all with a rag-tag group of kids mostly being the ones to discover what is really going on, The Resort is not your before bedtime read.

What I really liked here, beyond just the cadence of the story and that slow burn that is just so distinctly Little – and so weirdly effective, even though it should be too slow paced – is the atmosphere of the story. I felt the heat. The weird indolence of a bored vacation. The pompous luxury of something nice gotten with a coupon under the table. Then there is that creeping isolation of the desert, amplified by the weirdly off-kilter staff. Oh . . . and the spider thing. Yeah. So glad I didn’t read this one when I was in a hotel.

So, if you like your horror on the peculiar side with a dose of your day-to-day life turned upside down, creepy ancient men staring out of mirrors, evil hotels populated by staff who are just a little too cheerful, and the burning clarity of the desert, then buckle in for a weird ride and pick up The Resort.