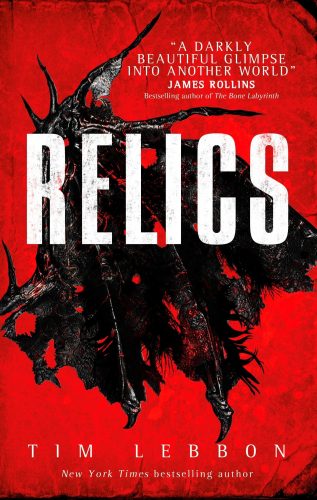 An Urban Story of a Dark Collection

When Angela’s boyfriend, Vince, suddenly leaves without a word, his farewell a cryptic letter, she refuses to believe that he willingly abandoned her. As her investigation into his seemingly normal life starts to unravel an unwholesome trail, leading straight to a famous and violent crime lord, she also refuses to stop believing in Vince’s ultimate goodness. He may have lied to her about who he was and what he did, but somehow, she knows that his love was no lie. And so Angela searches and encounters a world she never knew existed: one that is ancient and fragile, one that is filled with danger.

Tim Lebbon’s Relics is more urban fantasy than straight up horror. Our erring Vince is part of an underground network that sells relics of past inhuman civilizations – faeries, satyrs, golems, everything that was once magical and not of this earth. These relics are often grisly – part of an ancient, mangled wing, the head of a cyclops, even the full body of a mortally wounded fairy. The important thing is that they are all dead – dead a long time – true relics. But as Vince follows this questionable line of work, he discovers that these ancient beings are not all gone, and some people want fresher specimens than what he normally delivers.

Meanwhile, of course, we meet The Kin, a mismatched group of magical beings living under the radar, trying to survive, trying to evade being bought and sold and carved up for their magic. The problem? There are some evil humans with big cash looking for them and an insane satyr determined to be the last of The Kin.

Angela stumbles into all this on more for the sake of love and answers. Along the way, we follow the subterrain world of The Kin and watch as their desperation for survival turns into something violent. Will they align themselves with the “good humans.” Is Vince one of the good humans? Is Angela?

Relics is a weird book. I grabbed it for free on Audible and decided to see what this famed horror author was like. I was surprised to find myself more in a fantasy story, something that is very Holly Black, without her depth of characterization and feeling. What happens is that the story, with all its strange creatures, becomes the heart of the tale, but the characters fall far behind. Vince and Angela are simply catalysts, neither much outside of their immediate needs and mechanical involvement. The Kin are a bit more developed, but still the action and revelation is far more important than the personalities in the story.

I ended up enjoying the tale for its imagination, for its occasional scenes of tension and danger, but I doubt that I’ll seek out the second in the trilogy. I puzzled over this awhile. Perhaps it’s just not my favorite genera? I wondered to myself. But finally, after really thinking, I realized it was because the story was good, but the characters weren’t. They weren’t necessarily bad either, but they were just there. One dimensional. Vince and Angela are connected by an ooey-gooey love story that doesn’t ever allow Angela to doubt the man who left her. The Kin, of course, are all about survival. One nymph has a somewhat more well-rounded approach, confused between loyalty to her own kind and that to the human who saved her, but most of the The Kin, through necessity, are also one-track.

There are two villains. One is the insane satyr. He is a GREAT character, but he gets almost no screen time and is dispatched with little effort. The other is the evil collector with all her money and greed. She is the typical all-bad uber rich villain. There is nothing to love-to-hate here, nothing that takes her into the realm of a complicated villain.

And so, the story is good, the idea is brilliant and creative, the pacing is even ok, but I was never in love. And that was ultimately because the characters who walk this world just aren’t powerful. I cared about what happened in the story, but not about what happened to the individuals in it. So overall, I’m torn on my rating. Relics was good, not great. Something I enjoyed but wouldn’t seek again.