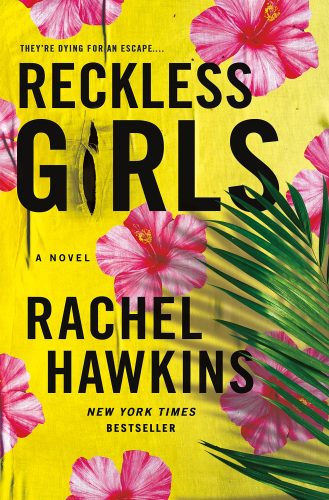 Mero Island is outwardly beautiful and very isolated, but it has a dark history. There were shipwrecks, cannibalism, and lonesome men living stranded in the depths of the jungle. But Lux McAllister doesn’t know all this as she accompanies her boyfriend, Nico, as he charters his boat to take two college best friends to the island in Reckless Girls.

This was hardly Lux’s dream when she left everything behind. She was supposed to travel the world with Nico, but a fight with his wealthy family and his continual stubbornness has put them in a holding pattern. Lux cleans hotel rooms by day, and Nico spends his time on The Susannah, his boat, dawdling and repairing. He sees this sudden charter as a new chance. Lux sees it as more of the same. The endless waiting, the dirty jobs, the hope slowly seeping away.

But as Lux and Nico travel with Brittany and Amma, the college best friends, the foursome become fast friends on the tight boat. When they arrive at the island, one they are hoping will be desolate, they instead find a huge catamaran and a golden couple with enough wine and good cheer to make the new plans appealing. From there, it’s days of sun and sand, drinks at night and bonfires, and everything slows to a hot vacation crawl. But there is more writhing beneath the surface than any of them can suspect. Mero is working its deadly magic, and a new visitor to the island triggers the final act of love and betrayal, grief and insanity, and a long list of gruesome survivors who will (and have) done anything to survive.

Reckless Girls was my first experience with Rachel Hawkin. At first, I was off put by the rawness. The characters’ constant swearing seems overdone, trying too hard to create a sense of realism, but as I got used to it, it fit with the broken people who paraded across these sun soaked, sinister pages. My dubiousness transformed into an edgy tension, an immersion in a world that is too perfect to be true. As the secrets start to come out, Hawkins mixes past and present, slowly painting a picture of each of the women on the Mero island, teasing out their darkness. They are oddly sympathetic, despite the many flaws.

Some of the women are rich, seemingly indolent, privileged and unaware. Yet here too they have a certain humanity, a common grief that binds them, although it hardly atones. Each woman has a secret in her past, a pain that is compelling, that drives our empathy while stoking our distrust. The moral ambiguity grows as the island transforms from a paradise to a prison. A skull is found. Then an ancient shack in the jungle. Past and present merges. Characters become more bestial, more themselves, and slowly the best laid plans are revealed. It’s atmospheric, stuck somewhere between beauty and horror, and as the landscape turns so do the characters. There is a raw wickedness, a Lord of the Flies aura mixed in with something more gothic. Between sun and sand there is death. Between drunken nights and hazy days there is betrayal.

I soon put aside the other books I was reading and focused on Reckless Girls. I couldn’t get enough. The atmosphere, the characters, the schemes! It’s a good puzzle, one that fits together in the end but can’t be guessed. And the last line, the last segment! I see now what all the fuss about Rachel Hawkins is about. I’ll be back. I’ll be reading more.