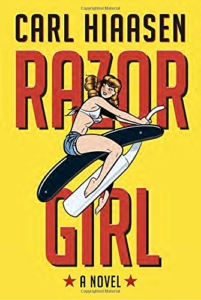 Careening out of control in slap-stick over-the-top classic Hiaasen style, Razor Girl is the latest adventure of former Detective, now turned restaurant inspector, Yancy. First introduced to readers in Bad Monkey, Yancy is desperate to ditch roach patrol and return to the world of crime, if only he can convince the sheriff to overlook the Dust Buster assault that originally cost him his badge. When a high-profile kidnapping case involving a Duck Dynasty like star hits Dade county, Yancy leaps at the chance for redemption only to be pulled into the misadventures of a seductive scammer with a lucrative rear-ending scheme inspired by some erotic grooming techniques.

Meanwhile, the vacant lot next to Yancy has captured the interested of a smarmy lawyer and his flirtatious fiancé. The issue: they want to build bigger and better on the spacious lot, sanitizing Yancy’s beloved view of nature. With the help of some Gambian Pouchies (i.e. really, really big rats) and a $200,000 diamond hidden in hummus, Yancy just might have the perfect scheme to change their settling plans.

Things just keep getting crazier when the mob gets involved in both the scams and the real estate kafuffle. Trying to work out a deal with the smooth talking Trebeaux, the owner of Sedimental Journeys, the local mafia gang leader, “Big Noogie”, is less than pleased when several tons of refurbished sand substitute are dumped on one of their hotel’s exclusive resort beaches. The glimmery stuff may look pretty – but it turns out that the glass content is too high and Trebeaux has to do some quick thinking, and pull some favors to salvage his business and save his life. There’s just one other issue – along the way Trebeaux’s fallen for the Big Noogie’s girlfriend.

Back on the trail of ill-formed crime, street thug Blister would do anything to meet his bigoted, bearded, and ludicrous idol, Buck Nance – star of poultry farming reality TV show fame in Bayou Brethren. When Blister rescues his favorite chicken farming celeb from an unpopular gay-bashing nightclub routine, he realizes that a bird in the hand is worth some potential jail time. Determined to work his way into the world of reality TV virtue, Blister’s demands are thwarted by producers determined to cover-up the effects of their captive star’s big mouth. With the local police hushed up and on the trail, it looks like Buck can be recovered – yet Blister’s learned a little too much from the big-time TV life and is ready to negotiate hillbilly style.

Through all the plots, sub-plots, and sub-plot’s-plots Hiaseen works his magic. Readers unquestioningly believe all of it while at the same time enjoying the sardonic snubs of everything from the law, to chicken farming, to reality TV, to real events recorded in Florida (i.e. the shaving lady who inspired the entire plot). The fun and fast read veers around delivering encounters with rapacious pouchy rats, a lady who shaves her most sensitive bits only when driving, a soon to be ex-star with a fake life, living snakes in restaurant cuisine, an attorney secretly addicted to the deforming deodorant/male stimulant Pitrolux, a benevolent gangster with a convenient “service” dog, a vacationing mortician girlfriend finding herself, an ex-criminal crank with reality TV aspirations, and . . . well . . . just all that lovely weirdness that could only be Florida. Yancy’s even got some disturbing stuff in the deep freeze, right next to the peas, as always. In Hiaasen’s Florida things are heating up fast and this crazy train is ready to take you on another breathless ride.

If you’ve already met Yancy in Bad Monkey then you’ll appreciate the subtle nods to established character eccentricities and ongoing in-jokes. For new readers, you’ll want to check out Yancy’s first attempt at getting his badge back after you read this one because you’re going to fall for a new favorite character between the pages of Razor Girl; but, essentially, the novel stands on its own and requires no previous plot-essential knowledge. What you need to know is covered in the first few sentences of chapter one and the rest is all fun and games. Well, dangerous fun and games…Unequivocally recommended as one of my personal favorite Hiaasen offerings – it’s good to see Yancy back, shutting down restaurants and fighting crime, one inspection encounter at a time.