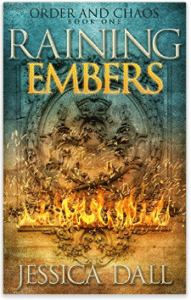 Set in a richly textured world torn between warring aristocratic factions and secret treachery, two very different teenagers hide from reality in their own ways. Brier Chastain-Bochard, spoiled daughter of the librarian and upper-class native by dent of a fortunate birth, hides from the cloying decay in the air that only she can smell. She seeks solace in decadence and alcohol, parties and friends, yet she remains haunted both by smell and an inexplicable memory of burning to death.

Palmer Tash, lower class citizen and orphan is being raised in the church, an enormous citadel that mixes the boundaries between religion, mysticism, and long dead magic. Palmer has a gift for maps and he might even have some second sight, however, his curse is that he can only hear and truly listen to one sound at a time. Surrounded by a world of sensory overload, he’s trying to lay his own ghosts to rest. But the church is paying too much attention to him and seems to suspect something even he cannot yet admit to himself.

When Brier and Palmer are united by kidnappers, together they must discover their burgeoning powers as Order and Chaos. Reincarnated repeatedly, older than life itself, they are unfathomable and yet the haunting ties of fake “human” lives call them back, call them into the heart of a war they do not understand. A war they have unwittingly been the central figures in for millennia.

Along the difficult journey they meet a young child with dire potential, a beautiful yet cold shapeshifter, and two men nearly as old as themselves and equally tied into their dreadful tale.

Intense and charming, the pseudo-Renaissance world (with some Italian and German based language and terms thrown in) gives readers a familiar touchstone in a strange atmosphere where revelations are quite literately earth shattering. As the first part in a trilogy, Raining Embers maneuvers steadily between character, world building, and tense, exciting scenes (including some grade A carnage toward the conclusion).

The stories begin separate, both Brier and Palmer struggling between a perceived outward life of normality and what they consider to be torturous, strange disabilities. Submerged nightly in flames and choking on decay, Brier cannot explain her perception of the cities’ foulness and while she seeks solace, she can’t out run (or in this case out party) her destiny. Strong, independent, and yet vulnerable in the very intensity of her powers and the lies that surround them, Brier is an emotionally complex character who grows from party girl to revolutionary and readers cannot help but love her and sympathize with her at every step along the way. As the embodiment of Chaos Brier has perhaps the most complex role, attempting to find meaning in the living nothingness and destruction she embodies, trying to find a balance between her nature and her very human emotions for those she loves and seeks to protect. With a steady sense of right and wrong, Brier will not be told what to do by anyone – not even her own innate nature and it is in this strength that she shines most, anchoring readers to the story and making us believe in everything without question.

The introspective Palmer, embodiment of Order, holds himself more aloof, plagued by visions and an omniscience that is just as eerie as it is totally necessary. Learning to hone and develop his talents it is up to him to guide both Brier and Rosette (the young child) into a balanced future instead of the brimstone ending all of his visions are promising. A brooding character, the narrative hints at Palmer’s secrets, providing anticipation for further revelations in the second and third novels.

Told through alternating points of view, the story follows the awakening of adolescence in a whole new way. Brier and Palmer must learn to work together, sorting out what remains at the close of Raining Embers including complicated love/hate feelings for each other. Together, they must attempt to understand the very largeness of their universal roles and all the hideous responsibilities entailed by Order and Chaos revolving in a continually forgotten, timeless cycle.

Reminding me of the Zaniyah Series, although with more of a nod toward adult readers (although being ostensibly labeled YA in most Amazon reviews), the writing has an addictive grasp, creating sympathetic characters and an intriguing world where answers are slowly unraveled and not even then understood in their full complex. An epic ending leaves readers satisfied by the action and pay off from a steadily building sense of urgency and wondering. If the first book in the series can end on such an extreme note, what can the future hold for Order and Chaos as they grow in power and understanding? What of Rosie and her own mysteries abilities, her semi-transformation at the conclusion amid the death and destruction?

Most importantly, while fantastical elements rule the series, emotions are tried and true and the strong, detailed writing engulfs readers in a relatable and unbreakable relationship with our beleaguered heroes turned super-godlike entities. It’s a unique feel, both modern and ancient, both known and everything unknown, combining Order and Chaos into an explosive beginning. What now lies beyond the pale? Has the devastation only begun and where do the roles of Order and Chaos come into the play with the experiences and needs of Brier and Palmer, the people?  Addicting, Raining Embers is a must read fantasy and an addicting first book in a promising series. Highly recommended.