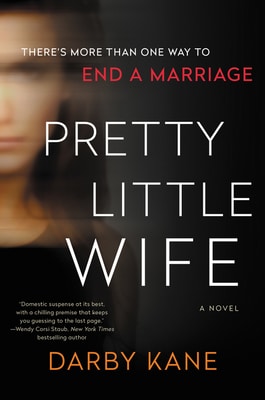 Aaron Ridgefield, beloved local professor, is missing. Lila Ridgefield, his cold, odd wife isn’t acting right. Ginny, the tenacious lead detective, suspects Lila, despite her solid stories, her unwavering eyes, her lack of emotional response. There is something far more hideous here than a man who left his wife. Perhaps it is even somehow connected to the local missing women. As Ginny digs deeper, the horrors of Lila’s past begin to emerge, and a strange pattern evolves. Perhaps Aaron wasn’t the perfect, beloved husband. Perhaps Lila had reason – but does that make murder any the less heinous?

Lila planned everything perfectly. It was all set-up. Even the cameras around the school and at the intersections will corroborate her. And she has the videos. The evidence. The way to destroy Aaron’s legacy. There is only one problem. The stage she set so carefully has been erased. The body is gone, and it appears that someone else has entered this strange game.

Pretty Little Wife is your typical domestic thriller. Two unlikable spouses, each jousting with one another, each emotionally distant, hiding something horrible. Aaron is the more obvious of the two. He is too perfect, too beloved, and in any kind of thriller that means he is hiding some serious skeletons and more than a few crimes. Lila, the one for whom we are supposed to feel sympathy, however, is a character who tells rather than shows. She has been battered too long, subjected to too much, and ultimately the shell of a self she presents to the world, the cold pretty wife, is all that is left. It’s too little for a connection. We’re in this only for the dénouement. The secrets. The confrontations. The showdown. The slow whittling away of reason and sense to reveal the seedy underbelly of a fantastical story that involves more violence and twisted coincidence than sense and continuity.

At first, Pretty Little Wife failed to really capture me. Now, if this had been the first thriller I had ever read, that would have been a different story. But by now my shelves are groaning with thrillers, and the formula is no longer new and exciting. I can see the twists coming, pick out the people who are too good to be true, see the direction and misdirection chapters before the surprise blow is landed. There is nothing new here. It’s not bad – just, well, expected. The lack of character connection doesn’t help. We’re here for the plot, and it is the same plot we’ve seen before, with the same devious moves and subterfuges and that one truly honest cop who won’t stop worrying the crime, diligently making its solution necessary to her own salvation in some weird, heroic backhand.

Ultimately, the surprise is aired. I started to get more excited as the story moved on. Heck, I like thrillers, I just do, even when it’s something I have seen iterated on so many times. But the conclusion? Too far fetched, too stilted and imperfect, with that balance of sudden salvation, never ending scars, and a cop who walks away now understanding that there are grey spots in the balance between good and evil. It’s interesting-ish, although fantastical and ultimately fake. Beach read worthy. It’s fun in parts (although stale in many others). For the thriller junkies, you’ll enjoy it, add it to the stack, read it, and forget it.