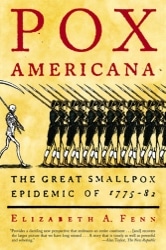 Epidemic?  What epidemic?  It’s an unsettling part of American history that you may have never heard of.  Starting in 1775, a tiny little virus – 300 whole nanometers in diameter – threatened to completely derail the Thirteen Colonies bid for freedom from Great Britain.  Small pox had appeared on the North American continent occasionally prior to the American Revolution, but this particular epidemic had an exceptionally wide ranging impact, spanning the entire continent.  Combining dramatic colonial history with intriguing medical forensics, historian Elizabeth A. Fenn deftly chronicles the story of Europe’s most devastating export, in Pox Americana.

General George Washington didn’t know what to do; he had personally suffered and survived the ravages of small pox in 1751 in Barbados.  Now, in 1775, he was supposed to lead the Continental army to war against the British, but many of his men were caught up in the throes of a small pox epidemic that was sweeping Boston.  While the virus was wreaking havoc with Washington’s war plans, it was also decimating natives all over the continent.  Playing virologic detective, Fenn pieces together multiple timelines, from the British colonies on the east coast to the missions in the Southwest and the trading posts in the Northwest. 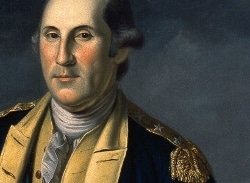 Full of data from all over the continent, compiled more than 200 years after the fact, the book is a thoroughly compelling narrative.  Combing great storytelling with captivating myth busting, Fenn captures the devastation that in some locations was almost apocalyptic in scale.  The virus may have been Europe’s most ruthless export and it undoubtedly had a huge impact on the ability of the natives to defend themselves against the white man’s continual conquest.

The book sets forth the compelling argument that by 1804, Lewis and Clark were late to the game.  The continent they opened to exploration was not the pristine environment that is so often portrayed. The smallpox virus had already completely transformed the human landscape.  Cultures had already been decimated.

A convincing and fascinating testament to how even small things can wreak colossal havoc, Fenn pulls together several different storylines to create one remarkable historical narrative.  In the standard version of colonial America, the small pox virus is rarely acknowledged as a major player, but without its devastating and deadly efficiency much of American history could have turned out quite differently.   Pox Americana makes that abundantly clear.

Check out some of Dave’s other reviews of early American history books:  The Counter-Revolution of 1776   /   Duel with the Devil   /   Lafayette in the Somewhat United States   /   Jacksonland