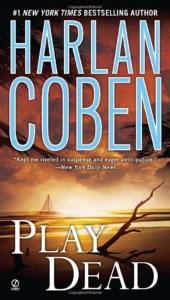 A Melodramatic Mystery with a Twist

Ready for a nine hour drive, the fiancé and I once again dug into my mystery box of eBay purchased audio books. This time, Harlan Coben’s novel Play Dead, a twisting mystery as the back cover blurb promised, went into the CD player and we both kicked back for the long ride and the murky story. Imagine then what a surprise it was to encounter, even before chapter one, a warning from the author advocating only stolid fans to proceed and all others to run, not walk away from this, his first novel which he considers amateurish now, in light of his later bestselling NY times series. We had both heard the name of Coben but neither of us were familiar with his novels and, not taking the warning to heart, we listened anyway, with a few twinges of anxiety because if the book really was as bad as Coben lamented, it was going to be a torturous all day drive.

It all starts with sultry supermodel and inspired business woman, fashion logo Laura Ayers and her secret marriage to the internationally renowned Celtics basketball star, dashing David Baskin. As with all couples, the made in heaven, all’s right with the world aura is punctuated by the darkness of family dynamics. Laura’s mother loathes David and it’s for this reason that the marriage and the sexy honeymoon in far-flung Australia is a big secret. Only when David goes for a swim later to be declared dead does Laura begin to follow the sordid clues to a murder thirty years old and a long string of retribution and lies.

Starting with the depressed, and frankly over dramatic tones of Scott Brick, our narrator for the 17 hour reading extravaganza, Play Dead simply didn’t grab me. Maybe it was the author’s own warning still resonating in my mind or perhaps it was my general yen to align with the underdog, not two ridiculously wealthy superstar heroes with oozing charm and charisma and an unbelievable down-to-earth veneer. I shrugged off my prejudice, wanting to instead soak into a steadily convoluted mystery that embraces both past deception and cold blooded killing. What I got instead was a lukewarm story that didn’t truly capture my interest until the first three fourths of the novel had plodded by and the action of the plot finally discovered its freedom and came out to play.

Laura wades through thick, grisly prose with the flair for a teenager’s overdramatic sorrow, looking for clues to David’s disappearance, and later the inexplicable activities that both lead up to and follow his death. The pacing is slow, the novel fumbling with atmosphere and searching for its stride. That’s not to say that the narrative isn’t interesting, but it’s hardly the promised edge-of-the-seat mystery thriller. Laura’s friends and family evidently have something to hide and it’s the craftiness of the mystery, more than its telling, that keeps readers pushing forward while occasionally having a good laugh at the morose prose and even more lugubrious narration.

Coben is careful, too careful, not to give away the killer’s gender, and this means that readers form an opinion (a surety really) early on and stick with it right until the bitter end. This is less of a deterrent than I felt for, say, the first nine discs, especially since Coben does deliver a table-turner and thwarts expectations with a surprise revelation. As with everything else, however, it takes too long to be entirely satisfying and, despite the surprise, has the distinct flair of an overplayed gimmick.

The threads that combine to form the secret web of lies loop and spiral until they create a cobweb. While some of the tangles are beautifully intricate, albeit disturbed in the sense of overplayed B-movies, readers are left to examine the messy ball of threads, trying to figure out where they all connected and if they all had a true finish or merely unraveled in the forgotten layers of a slow paced, over populated, drama. Brick’s steadfast woeful narrator further exacerbates all of the outlandish, sticky situations, leaving readers relieved that despite the final heart-pounding moments, this giant of a novel is finished. And, let’s be honest, while it wasn’t the type of audio book that ends up getting thrown out of the car like a Frisbee half way onto the interstate entrance ramp, it’s an accurately labeled amateur effort with tints of greatness, that just doesn’t quite make it.