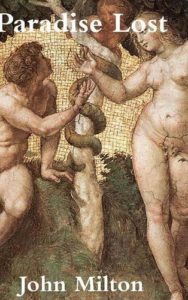 “What is dark within me, illumine.”

Back on the classics kick, I warily approached Paradise Lost. The antiquity of the item combined with the natural complexity of epic poetry was daunting at first, especially because as a devoted bookworm (and official holder of an English degree) poetry remains elusive and incomprehensible to me. The story, written by John Milton who shadows Homeric tradition by adopting blank verse (instead of the typical approach of his time devoted to rhyming verse) depicts the aftermath of Satan’s rebellion and revenge, the rise of sin, and the fall of man (i.e. Adam and Eve’s expulsion from the paradisal garden and curse for eating from the tree of knowledge.)

The story unfolds across twelve books switching perspective between two central plots: Satan’s heroic journey, alone, to corrupt earth and the tainting of Adam and Eve’s bliss with the hint of fatal temptation. While the writing was, by its very nature, complex and erudite, the gist of the story combined with the authoritative characterization and the tension of an inverted Odyssey like adventure, drew me into the story on an emotional and not academic level. Simply put, I tried not to get into it, but I did despite the difficulty of the language and the intricacy of the ideology.

It all begins after the war in Heaven, which is told through multiple perspectives in hindsight as the narrative proceeds. A devastated yet still not defeated Satan, cast with his minions into a hellish realm away from Heaven and God, continues his defiance with an elegant and charismatic speech, bolstering his followers to compound the errors of hubris with the creation and dissemination of evil. A tragic hero, Satan as the character here makes audiences uncomfortable because he can accomplish evil with seemingly pure motives – his very devotion to the fallen angels and his bravery to venture to earth alone, plus the occasional taint of a woebegone rebel – make this loathsome beast oddly likable. Once one of the most beautiful creatures in Heaven, Satan can turn both charm and eloquence to best effect with all the dashing capabilities of a misunderstood hero. Don’t be fooled though.

As Satan begins traversing the stygian realms to work vengeance and share the suffering, Hell’s gatekeeper, the gorgonish monster Sin and her perpetual tormentor, Death, reveal their parentage and the degradation of a vain, arrogant, and incestuous parent with aggrandizing schemes. Even here, even during their pain, Satan can beguile and Sin, oddly, can make us almost sorrow for her plight. It’s an interesting emotional conundrum and an uncomfortable characterization. Milton doesn’t shy from the complexities of evil and the beautiful varnish often used to cover over the most obsidian stains.

Meanwhile, as Satan makes his deceptive journey, stating the famous “It’s better to reign in Hell than rule in Heaven,” Adam and Eve enjoy connubial bliss in the Garden of Eden. Mutually devoted and yet complimentary in their differences, the happiness depicted is oddly sexy and yet down to earth. This isn’t the old-fashioned prudery you might expect and watching the happy couple enjoy peace is heartrending since we know that soon their quiet realm of love will be irrevocably destroyed, a wedge driven between the sexes that will never lift.

With appearances from Michael and Gabriel to warn Adam about his new enemy and detail the war in Heaven, the later portion of the narrative opens, shifting away from Satan’s story to that of Adam who with full knowledge is exposed to the secrets of Heaven in order to secure his protection. Free will, however, has its own pitfalls. Two kind of sins occur: first Eve’s where her vanity is amplified by the well-spoken Satan, disguised as a serpent, and then Adam, who in true heroic fashion chooses to sin and thus wed himself to Eve while sundering himself from God. The elevation of doing wrong is followed by the initial glut of power only to be drowned in shame and hopelessness.

Another visit from the heavenly host then introduces the third act, as it were, of the poem where a devastated Adam is allowed to see into the future and witness the full ramifications of his choice to doom humanity for love of a woman. It’s a bit touchy here, especially for modern readers, in how Eve, ever the little house wife, is never directly spoken to by the angels or let in on the high talks of the males. Her inferiority, a sign that Milton’s liberal mind wasn’t fully developed despite the scope of his narrative, is an irritant to readers yet the overarching message and the waves of emotion crashing from joy into a crescendo of regret sweep away our reserves. Despite flaws, the work is still great and still effecting.

The result is an argument to explain why God does (or allows) actions and reactions that we see as destructive to ourselves, the creatures whom he supposedly loves. Along for the ride you have the semi-sympathetic, semi-attractive rebel (Satan) and the emotionally naïve yet intellectually knowledgeable progenitors of humanity (Adam and Eve.) This creates a read that is just as overarching and explanatory of the tough questions as it is philosophically deep and viscerally stimulating. Our very ability to sympathize with the evil inherent in Satan bespeaks to our fallen status and continual return to vanity and personal aggrandizement despite the cost to personal happiness and social stability. In the end, as the “hero” destroys Eden and God is forced to displace his creation, all the while intent on redeeming them without ever expunging the ability to choose, audiences sit back and see again how we ultimately keep falling for that forbidden fruit and what, each time, it costs. Sin and Death are loosed, Satan does reign in Hell, and the earth is miserable. All for the praise of a rebel with a smooth tongue and the overarching charisma inherent within edgy deception.