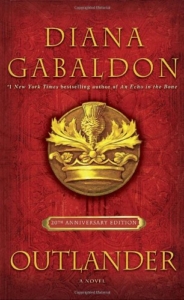 Why You Should Drop Everything and Read Outlander

Pretty much everywhere I go, from a casual bad movie night with friends all the way into the intensive atmosphere of the office, I somehow manage to hear about Outlander, both the book series and the television series. Finally, one day while I was at work and chatting with my colleague (also an avid book reader), I decided that there must be something in all this hype beyond the mere surface idea of gorgeous people in stunning love triangles experiencing smoldering page after page of seduction.  Of course, if the book turned out to be nothing but thinly draped erotica behind a historical backdrop. . .  well then, I still wasn’t doing too bad, was I? I plunged in, got the audiobook, and relegated my two hour daily commuting time to a world of outlaws and kilts against misty backgrounds and murmurings of witchcraft. The only thing I regret: why didn’t I listen to all the hype sooner?

What I discovered was that Outlander is far more than meets the eye. I initially had low interest because, frankly, I’m just not much of a romance reader. The entire idea of sexy men in kilts rescuing a cunning but inept twentieth century heroine smacked too much of those lurid grocery story novels with their glitzy cheap covers. Add to that the 800+ page mark and seven sequels, and a lot of gossiping and recommendations were required to overcome my general apathy.

As most of you already know, Gabaldon’s NY Times bestselling debut starts in 1945 with a feisty war nurse, Claire, finally being reunited to her husband. After so much time apart, the two seem as though they are strangers and despite some avid missing-you sex, the relationship has an odd formality to it and an undercurrent of worry. Add to this Claire’s intense desire to finally have children, and you already have a situation building. When the reacquainted couple, in this their pseudo-second-honeymoon, go gallivanting across the Scottish countryside to explore murmurs of old pagan rites, Claire walks between two portentous stones . . . and finds herself helpless, alone, and impossibly confused – two hundred years in the past.

Now in the days of Bonnie Prince Charlie, Claire is desperate to do anything she can to get back to her time and her husband. Yet, circumstances, in the form of his own ancestors, contrive to keep her from returning to the spot. Marked by the man who looks like and resembles her husband as a target for rape and general abuse, Claire is forced to reconcile the image of the person she loves from his not-so-glorious roots.

For the sake or protection, Claire falls in with a clan (and by falls in, I mean she’s taken prisoner) and seeks the help of one Jamie, a notorious outlaw in hiding with a soft heart and some bad-boy rumors. All the while trying to escape her more kindly captors, without falling into the hands of her enemies, Claire questions the possibilities of what happened to her and wonders if going back to the strange rocks will truly enable her to go home or perhaps send her even farther back to a more barbaric time.

The time-traveler on the run theme blends nicely with community suspicions, hints of witchcraft, and a reluctant yet beautiful love store. As Claire and Jamie transform each other’s lives, more than just affection is at stake. Claire has knowledge from the future – but should she use it? If she does, what will change? What is her duty to those in the past and those in the present? With husband in one time and lover in another, the immediate danger of clan rivalry, warfare, and even wolves is no match for the ultimate human conundrum: how can you follow a divided heart and how can you use logic when the impossibly strange has happened?

Outlander surprised me. For a book that’s ostensibly a romance, it’s so much more. Retribution and friendship plus elements of kinship combined with how things change and how they stay the same all coalesce to make this book a life story, albeit an exceptional one. Yet, it’s also beyond life too in all the good ways. There’s plenty of constant tension with adventure intermixed stunningly into breathless battles and desperate, sacrificial plans.

The amount of damage Jamie (and later Claire) can take is fairly unbelievable, and Claire’s adaptation to her new world (and ability to keep cognizant enough to not give away her stranger roots) are indeed “out there” and in the beginning the un-reality and casual acceptance of time travel simply bothered me. But then, the story found its feet and I stopped doubting. Ever transforming, it’s hard to put a concise summary on this tale because it’s more of a lifetime story, unfolding across multiple ups and downs with transitioning challenges, concentrations, and feats to overcome. Outlander could easily be divided itself into at least four different books and because of this concept the story is always fresh, making those 800 odd pages suddenly seem minimal.

What I really liked here, however, was the action and adventure. This I hadn’t anticipated. We don’t have a fainting, helpless heroine but a brave, funny, and often shockingly obscene (to the people of her new time anyway) lady who comes into her own doing everything from fighting wolves to torturing those she loves (yikes . . . that scene!!!) It’s not all love and kisses, although believe me, there is plenty of that, but loads of high octane swashbuckling with a modern perspective that makes all the old antiquities fresh and lively. Throw in some knife training, and you essentially have meaningful bloodbaths, midnight escapes, horseback riding, forbidden love, treachery, family double-dealing, witchcraft, and yeah – some of that time travel stuff thrown in for good measure. How all this melds into a cohesive and believable world is beyond my capability of understanding, yet somehow, with its own magic, it just does. This is the true draw of the series: creating a fantastical world in the real world and putting readers right there in the middle of all the danger, intrigue, and crafty plot twists.

Now, onto the love – because that’s at least half of the reason you should read this book and half of the reason that it’s plain addicting. Combining an adventurous atmosphere with a love story usually weakens the seriousness of the plot, especially when you have a pseudo-cheesy setup (historical grocery store novel man of amazing abs and kilt). Yet, the fact that it was never approached as a romance, but more something that evolved, greatly against Claire’s will and conscience,  combined with her moral questions and longing for her husband intermixes a tragic, yet beautiful and strangely acceptable mélange of drama, desire, and something indefinably wistful. Because of so much background, danger, and the intensity of all the characters, specifically Jamie and Claire, the sex scenes, which are indeed drawn out and ultra-descriptive work on an emotional level too, which is sure to further marry readers to the world and the hapless protagonists who have gotten in way over their heads. Plus, it’s just suitably steamy.

The audio book, read by Davina Porter and produced through Recorded Books is a must. Beyond saving the arms all that hefting of pages (George R.R. Martin already destroyed my feeble limbs), Porter captures the Scottish accent believably and vibrantly. The characters, already leaping off the page, need a voice and this medium allows them to be widely out there, which is just where they belong. Also, for those of us who cannot speak Celtic and also can’t pronounce it, get some added authenticity by hearing the familiar phrases as they really are – you wiley Sassenachs!