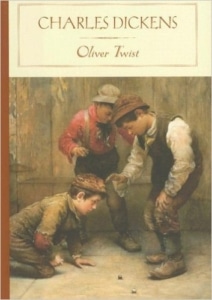 The Social Eye of Morality

Famous for the “please sir, I want some more” line Oliver Twist is the classic story of a young, orphaned boy growing up in the workhouses of rural England where gentle society, religious figures, and the powers that be oppress him merely for being born poor and illegitimate. A biting satire, not afraid to get into the realism of desperation, Oliver Twist journeys from the tribulations of the work house to the London slums where Oliver is held captive by a gang of thieves, told to either learn the trade or die. Jostled between the need to survive and his innate, innocent desire to do good, Oliver’s achingly poignant story is embroiled in the life of paupers, prostitutes, murderers, and the society that forces them to desperate measures. Dicken’s twisted humor cuts to the bone, his commentary is deeply effecting, and all the while he keeps the thrum and measure of an addicting story. Tense and dangerous, Oliver Twist isn’t the stuffy old classic you thought it would be, but instead a dark, often sordid story unafraid to look into the nooks and crannies of neglected cities and broken lives.

Beginning, as many of Dicken’s novels do, with the birth of the protagonist (Oliver) the story follows him from infancy to adulthood, only swerving at the conclusion to concentrate on the gang of thieves, run by the old criminal, Fagin, and the way in which their circumstances and forced corruption shape their destruction. Continually starved at the workhouse, Oliver is eventually thrust out (after requesting more gruel) into apprenticeship with a coffin maker (Mr. Sowerberry.) From here, the abuse escalates both physically and mentally and Oliver, stuck between the gallows and workhouse, flees to London, bathing in the anonymity of the city and the rumors of work for a willing lad. His own naivety soon leads him to be picked up by The Artful Dodger, a charismatic child thief Oliver’s own age, who ostensibly takes pity on a starving orphan and brings him home to Fagin, a deceitful man determined to rob all of those with whom he comes in contact. The inhuman Fagin with his continual application of “my dear” embodies all that is detestable yet irresistible about villainy and soon has Oliver thoroughly deceived. However, when Oliver is falsely accused of picking pockets, his newfound understanding leads to a desire to flee the gang of thieves and escape into a better life. Events spiral dangerously, launching volatile secrets to the surface about Oliver’s background, true parentage, and intended future. Meanwhile, Bill Sykes, a housebreaker accomplice of Fagin’s, has taken a keen interest in the boy and with the assistance of his presumed girlfriend (also thief/probably prostitute) Nancy, and hatches a scheme to drag Oliver back to the streets and into a life of infamy and terror. Should Oliver refuse, Sykes is always ready to make good on his escalating threats of physical violence.

A visceral novel, Oliver Twist while beautifully and eloquently written, is all about the story and the intense emotions elicited by the resulting depravity of an underclass desperate to survive. Examining the cause and effect relationships of callous superiority and the integrity of alleged social convention/position, Dicken’s critique here is made with bitter, bloody blows. Not ashamed to unveil the uglier aspects of life, and indeed death, Oliver’s story is an intensely personal one that, thereby, becomes universal. Dicken’s captures the despair and goodness of Oliver, projecting his own inner fears, uncertainties, and oppression in a cadence that breaks down barriers and transforms pages into thoughts and soul longings, touching readers in a manner that is more than just story. Dicken’s has always had this unique art at his beck and call, and Oliver Twist is one of his most shining examples of creating and peopling a world that will leave readers simultaneously laughing, crying, and deeply moved.

The cast of villains in Oliver Twist is exceptional including the chilling and volatile Sykes, who serves to deliver the most horror to a story already verging on the catastrophic. The final scene between Sykes and Nancy, and Fagin’s clever manipulation of the two, is a testament to Dicken’s great understanding of situational realities (such as the desperation of Stockholm syndrome and the platitudes of those who appear overly loyal – i.e. Fagin.) Indeed, the cast of villains, large as it is, becomes a sort of sordid family for us and in the later part of the novel Oliver, with all of his haunted history, steps aside to let us see the workings of good and evil in these desperate albeit all too realistic phantoms. Dickens has a lot to say here about the very nature of good and evil, and the inability to separate the two using the social eye. Even more so, he has a lot for us to feel here and satisfies the yearning for drama in story while simultaneously plucking the audience’s still beating hearts out. Everything is saturated with selfishness and selflessness, enclosure and escape, guilt and justification, and above it all, the secret of Oliver’s birth which ties everything into one and spells what can only be a bittersweet ending. Dicken’s even thwarts his society further with forgiveness and a disdain of the entire illegitimate stigma and the sins of the fathers visited on the sons theory of the day. It’s powerful and realistic, vicious with vicarious terrors and an entire “there but for the grace of God go I” sentiment. One of Dicken’s most moving works, Oliver Twist is not to be missed for both the beauty of its engaging presentation and the messages it purveys.

*A Note on Edition: I listened to the Books on Tape audio version as read by John Lee. Lee captures the voice, intonations, and London accents of the characters perfectly and peoples this already vibrant world in a way that supersedes mere reading and becomes a production. A very talented voice actor, Lee’s rendition of this classic should not be missed.