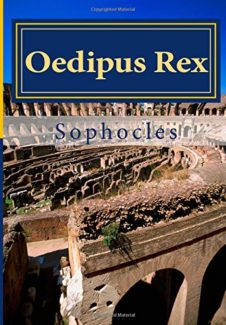 “Look upon that last day always. Count no mortal happy till he has passed the final limit of his life secure from pain.”

Back on the classics kick, my randomized list set me off to read Oedipus by Sophocles. The story, more commonly referred to as Oedipus Rex or Oedipus the King (to distinguish from a later work regarding the same ill-fated King of Thebes) is a story already commonly known and popularized by Freudianism. Unlucky Oedipus, through the viciousness of uncaring fate and an unshakable belief that his blessings would always continue, manages to murder his father, marry his mother, and create a cursed progeny from the same marriage bed from which he was produced – all without suspecting anything. As with most things in life, and especially in Greek plays, Oedipus brings the sour knowledge upon himself, his very own surety in his happiness a guarantee that a sorrowful chorus would (literally) follow him to his doom.

After having solved the riddle of the Sphinx and gained renown as a wise and intelligent man, Oedipus ascends the throne of a grateful Thebes and takes the widow of former King Laius, who has been missing so long his death is certain, to be his wife. When the good fortune of Thebes, however, turns Oedipus is convinced that the gods are angry and seeks to find out the truth of Laius’s demise. Despite warnings to the contrary, the King becomes cocky and swears a grand revenge on the killer of Laius. Thus begins a strange and twisted journey with the obvious moral that the higher you rise, the harder and longer you will fall. Oedipus is his own worst enemy, proving indeed that sometimes ignorance is bliss.

Despite the sheer complications of backstory and the scope of Oedipus’s fall from grace, the play is surprisingly short. A fast read, even the most perambulating pace leaves the admittedly disturbing narration finished within a few days. Recovery, of course, takes much longer what with images of hangings, gouged eyes, incest, and patricide fresh on the mind from a chorus who does dearly love woe.

Being a classic Greek play, the structure is pretty much what you would expect. A Chorus does most of the narration and also the foreshadowing and although Oedipus cannot hear them and happily goes on his way, readers hear the dirge long before the revelation, building up an epically depressing atmosphere that is sure to ruin your sunshiney-est day. Other characters, such as Jocasta’s brother Creon, populate the dialogue but its mostly focused on our Hamlet like character who spills his soul in monologue. Of course, its drastically different from contemporary writing styles but if you thought that antiquity and the “strangeness” was going to provide distance from the heartache, then you were wrong. Oedipus is just as shattering and shockingly rendered as the day it was written . . . and just wait until you get to the brief but overly gory and lavishly described eye gouging scene…

The only distracting element, or at least potential negative aspect, of a story that keeps its freshness and bitterness all these thousands of years later, is the language. I found myself having some difficulty following everything that was said due to the antiquity of phrasing and the set-up of the chorus. Along these lines, Oedipus, at least in its original version, has a level of difficulty aligned with that of Shakespeare. For the most part, you get what is said and being done, but every now and then the very arcaneness twists your brain and you have to shrug, keep going, and mentally say “hope whatever that was wasn’t important.” It’s not an especially hard struggle, but difficult enough that you won’t be toting Oedipus and his grim reality to the beach. You probably also shouldn’t be listening to it while commuting, as I was. This book deserves respect and concentration.

On those notes – one other word of somewhat warning. If you’re listening to Oedipus from an audio book version, as I did to spice-up my daily commute with some ancient misery, be sure that you read up on the voice actors and get a good recording. My version, translated by Sir George Young, was read by the Online Stage, which probably explained why it was pretty cheap for an Audible book. The main reader had all the verve and clear enunciation of an octogenarian having a stroke. Often, my mind just drifted away, despite the intense sordidness of the plot, because the main reader presented as though he was half-asleep while reading a chore list. Narration, especially with classics which already have some of a language barrier for the reader to overcome, should be presented with the excitement and fire that has kept them burning in the hearts of readers for so many generations. For that reason alone, don’t select the Online Stage as your first intro to ancient Grecian drama!