The Secret Life of the Octopus

Since my discovery of the Baltimore Aquarium and its gorgeous living displays, including everything from sharks to luminescent jellyfish to a giant purple octopus, I’ve forged an enduring fascination with the little known animals of the deep. Anyone who knows me is aware of my shark fetish from my overly shark-ized cubicle at work to the fact that my bachelorette party took place at, you guessed it, a special shark tour hosted by the Baltimore Aquarium. These fierce predators of the deep, however, aren’t the only ocean dwelling denizens that captivate my imagination. The extreme intelligence and inquisitive nature of octopuses, creatures that are so dynamic that boredom will literally kill them, coupled with the unique physical attributes ranging from jet propulsion to intricate and ever changing skin patterns, bespeaks an alien race, similar to some being you’d encounter on a Star Trek adventure. Finding a book about octopuses that is not intended for children or dedicated to pictures only is a challenge. When I finally found Octopus: The Ocean’s Intelligent Invertebrate, written by three scientists with the curious laymen in mind, I knew I had to dish out for the full glory – a hardcover edition.

What I encountered within these pages was both informative and yet disappointing. Little is actually known about octopuses and much remains a mystery (at least, it did as of the publishing date set in 2010). Researchers and co-authors Jennifer A. Mather, Roland C. Anderson, and James B. Wood were required to elaborate most of the speculations on octopus life and daily ritual based upon the supposedly similar and better researched squid. Appending personal encounters and conjectures, the authors’ take squid data and bring the focus down to a chatty level that entices amateur marine explorers, such as yours truly. However, the fact that so much remains unknown or only guessed at, undercuts the authority of the tome and keeps the mystery alive a little too well. What could they do to fix this? Years and years of expensive and intense research . . . not exactly something for which the luxury, money, and time is available. 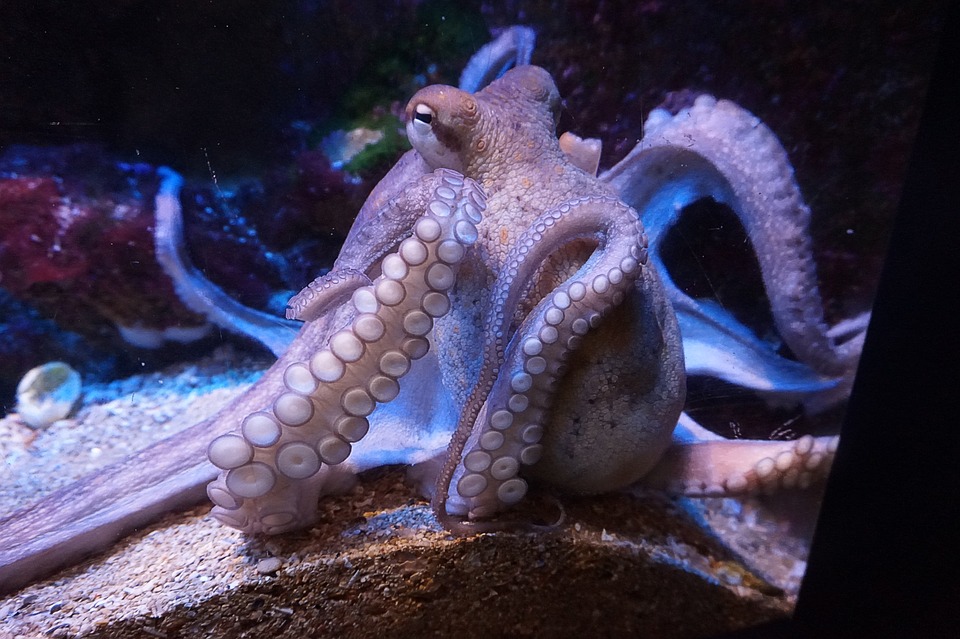 So what does Octopus provide then if the pedantic readers among us are clamoring for more solid facts and less educated guess-work? The authors do manage to effectively galvanize readers (and hopefully the more microcosmic oceanography focused world) on the importance of learning more about such animals. Octopuses just deserve it. They’re foreign and fascinating and oddly human in their desire for mental stimulus. If you didn’t already like the octopus, this book will make you fall for them. Their lives are simply strange with so many gaping holes. From nearly microscopic plankton like creatures they grow into the majestic and sometimes humongous animals we puzzle over in aquariums. With problem solving capabilities, eight appendages, and built-in camouflage, it’s surprising that such complex and finely tuned creatures typically have a life-span of no more than three years. Solitary loners of the sea, the often dangerous mating ritual is literal death, showing how instinct propagates the species while ending the individual. This is only the surface of what is known and suspected, yet there is so much more. For example, those gorgeous skin patterns may be language.

While the authors keep in mind that the intended audience is lay readers with some curiosity and a respect, if not understanding, of science, the book doesn’t lose that National Geographic like feel. While facts cannot be validated or even provided at many junctures, there is no lack of hypothesis backed by reasoning and similar studies, plus individual stories from the authors that give the book a personalized feel and showcase the authors’ passion. Lay readers are introduced at a comfortable level without feeling patronized.

Thirty-eight full-color and glossy pictures also compliment this particular book. This was the main reason that I chose the hardcover as averse to the more reasonably priced Kindle edition. Kindle itself, even the fancy versions (yes, I have three including the touted Fire) doesn’t do justice to illustrations, much less high resolution images. The book is large enough that it looks well on display without being too unwieldly while reading.

Overall, Octopus will leave readers with many questions and a new respect for a mostly unknown creature.  Hopefully further studies and writings will be dedicated to the enigmatic octopus.