“Let there be water!” 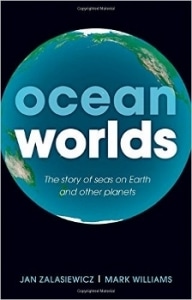 They cover almost three quarters of our planet, providing the Earth with its distinctive “blue planet” moniker. Yet it hasn’t always been thus. The Earth’s vast oceans – seemingly permanent on a human scale – didn’t appear until our planet was 700 million years old. Where did all this water come from? The mysterious story is a lot more fascinating than you might think and it’s expertly told by geologists Jan Zalasiewicz and Mark Williams, in Ocean Worlds.

The authors start the story of Earth’s oceans with a prequel, explaining how H₂O – composed of the 1st and 3rd most common chemical elements in the universe – first formed shortly after the Big Bang and has been present throughout the universe in immense quantities ever since. When the Solar System began to form some 9 billion years later there was plenty of water but very little of it accumulated on Earth. Once the planet cooled, water began arriving from various sources and the world would never be the same. Astonishing in its scope, the geologic detective work required to put this ancient hydrologic puzzle together makes for intriguing reading for anyone interested in some really deep time travelling. 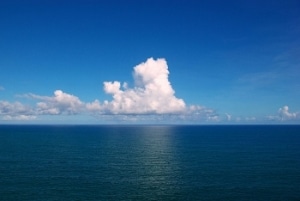 A quiet day on the Atlantic.

Zalasiewicz and Williams go on to describe how water has continued to profoundly shape our world, from plate tectonics to climate patterns and the evolution of life. They also discuss the many ways that more recent human activities have altered our oceans, most likely irreversibly and potentially to our peril.  They include speculation about the long term future of our oceans, which will continue to lap at our shores for many more ages, but not forever.

In addition, the book reveals the evidence for oceans on other worlds, from incredibly hot and toxic Venus to cold and dry Mars and on to the bizarre moons of Jupiter and Saturn. The authors even spend a chapter wondering about ocean planets orbiting distant suns.

Sure to appeal to rock geeks of all varieties, Ocean Worlds is well told tale of oceanic geohistory that kept me entertained throughout. Displaying a profound depth of knowledge and plenty of enthusiasm, Zalasiewicz and Williams are adept storytellers who touch on dozens of scientific specialties – from astrophysics to zircon crystallography – in their quest to reveal Earth’s many secrets. Highly recommended by this science geek.

Read Dave’s enthusiastic review of a prior Zalasiewicz work, The Planet in a Pebble.