None of These Diseases 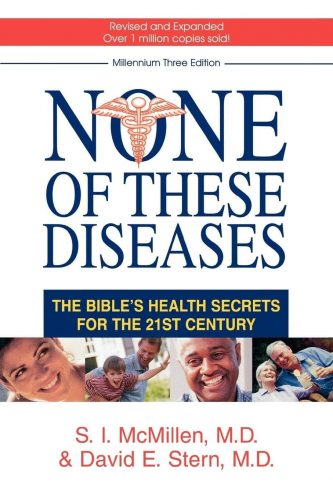 A Look Behind God’s Ancient Laws

Anyone who has spent any amount of time with the Old Testament is familiar with the seemingly endless laws, the daily thou shalts that get down to the level of when and where to relieve oneself, what foods can and cannot be eaten, when to rest, and even when to wash and when to quarantine. As children, these sections seemed tedious, but as adults we start to wonder about these ancient laws that seem to have more to do with the health and wellness of God’s people than with religious worship. Even back before mankind understood germ theory, God had our collective backs. Following His laws has not only spiritual benefits, but physical ones as well.  None of These Diseases uses the lens of what we now know today about God’s ancient and current laws to look at the science and common good sense behind why they continue to protect His people.

The book is broken into five sections, with the first being my personal favorite. The first section deals with some specific laws of the Old Testament and looks at their scientific backdrop. The focus is mainly on food, cleanliness, and healthiness laws, including the avoidance of dead bodies and the very specific regulations about where to build latrines. Some of the benefits we already know. The ancient Jewish people built their latrines away from their camps, keeping disease at bay, whereas the gentiles did not (and history has shown how disease can quickly spread from this unhygienic practice.) The co-authors also spend a lot of time talking about infant circumcision, making the case that it was mostly a health practice that prevented certain kinds of cancers and other later in life problems. Here the science is strong, and the authors give readers a behind-the-scenes history of germ theory and some staggering statistics.

The following sections take the Bible at a more generic level, sometimes hitting the mark straight on and other times stretching into a semi-obscure sermon that stretches and uses basic premises instead of the anticipated (and fun) science and statistics. It’s not always so, but after the first section that perfectly merged Biblical truths with some hard-hitting proof, the more touchy-feely sections are less strong. The weakest points, in my opinion, are the chapters on alcoholism and addiction to cigarettes, which have more of the book’s original 1960s vibe. Not to say that the sections aren’t interesting, but they stretch the point more than the others.

Follow-up sections talk about sexual wholeness, including an interesting look at homosexuality and some related studies, how stress wreaks physical havoc on the body, the degenerative effect of anger, and finally, dimensions of spiritual wholeness. Each chapter is short, written in an easy-to-follow manner, and informative. While none of them are quite as intriguing as the statistics heavy first section, they all more or less make their mark and give the readers’ something to think about. I really enjoyed None of These Diseases for the fresh look it takes at problems we usually don’t think of in light of God (i.e. how to deal with stress) and how it also uses empirical evidence to prove how God always has and continues to protect those who follow Him.