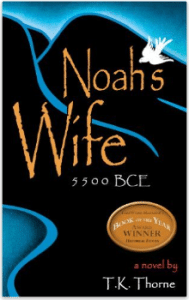 An Ancient Thriller with a Heart

With a grounding in the Noah’s ark story and an imaginative penchant for ancient history, danger, adventure, and complicated emotional life, Noah’s Wife is the story of one woman, two loves, religious prejudice, family ties, and the advent of apocalypse. In the Bible, Noah’s wife is an unknown figure, a woman living in the shadows of extraordinary times, suspended in the beating heart of a story that would be told and retold for thousands of years. Fascinated by the prospect of such a woman, T.K. Thorne writes a fiction of Noah’s wife, Na’amah, combining archeology, a good dose of spunky feminism, some surprisingly action packed sequences, and the overall flavoring of ancient history combined with modern fears.

Noah’s Wife is not a Biblical story or Christian fiction. As with Thorne’s other novel, Angels at the Gate, which focuses on the untold story of Lot’s wife, the narrative has a more anti feel when addressing religion, specifically the God of the Old Testament also known as Father God in this narrative. It is the goddess who has power, the women priestesses who have the ability to save, and the men with their male god are usurping the proper balance of things, and essentially introducing a flavor of chauvinism to the world.  One gets the impression from the narrative that the author and characters aren’t that keen on religion, much less Christianity. However, the story never claims otherwise. It claims to be just that, a story. As a devoted Christian myself, I cringed a few times, but mostly I was just mesmerized by the strength of the narrative and the lively imagination of the author combining with her unparalleled ability to create characters who felt authentic and demanded sympathy. I just couldn’t stop reading.

The story begins with Na’amah as a young child, a beautiful girl who is considered peculiar. In modern terms, we recognize that she has Aspergers and while she has difficulty making contact with people, her savant capabilities have secretly marked her as the goddess’ chosen. Na’amah’s uniqueness puts her in a certain position of danger, the stolid hatred of her brother Tubal puts her in even greater difficulties. When a brief flood occurs during Na’amah’s formative years, Noah, the aged local carpenter, and his ability and willingness to build a boat-house persuade her to marriage. But can she really give up her childhood friend Yanner who has grown into a handsome young man and is used to her strangeness. Likewise, can she give up her sheep tending, the quiet serene moments in the hills of Turkey where she embraces who she is and what her destiny leads to? Thoughts of marriage cloud her mind and it is only later when she realizes the true scope of her purpose and the dire journey that will lead to a warning before the sea breaks loose and floods the world.

Covering a grand scope, the tale begins in childhood and ends with old age and covers a lot of ground. It’s got the formulation of an epic and shifting parts take us through numerous journeys to reach the breathless conclusion where, you guessed it, the flood occurs. Adventures in love and betrayal morph into Na’amah’s captivity as a slave and her gallant escape attempt. The goddess, ever a figure of power and ominous future, filters passed Na’amah’s disbelief and calls to her from the depths of a sacred cave. Noah is a kindred soul, a kindly man with a deep understanding of his new wife, her fears, her needs, and her other loves – but can he truly understand and embrace her true role, her destined purpose?

A notable (and exceptionally pleasing) aspect of the drama is Thorne’s inclusion of animal companions in a way that touches the pet lover’s soul and shows a deep connection between the characters and their surrounding world. A host of animals appear throughout the narrative, but none are as important as Na’amah’s exotic white bird. If you know your Bible, you can guess the role her beloved companion shares in the conclusion of the tale. And if you don’t, well, be prepared to see the bird as another character and worry over its safety and health at various moments. A sure bonding experience with Na’amah’s world, the inclusion of animals and the fervor to save and protect them brings scope to the narrative, making the characters real. Despite the impending flood and its devastation, the characters are ultimately human with loyalties and worries that supersede destiny and mark them as denizens of a world with which you and I can identify.

Perhaps the most addicting aspect of Noah’s Wife is the oscillation between intense internal drama and external threats. The novel has an addictive balance and a yen for the presentation of action that is breathless and above-and-beyond the expected. Combining the thriller feel with the ancient world gives it a viscerally timeless quality and puts readers in the shoes of these characters from so long ago. The passionate emotions of Na’amah and her tender relationship with Noah combined with the confusion of her friendship with Yanner involve readers on an emotional and mental level making the action matter. We care if these people live or die and we want Na’amah to find the answer before it is too late.

Thorne’s novels are certainly unique, a style and subject matter all her own. The merging of ancient and modern along with internal and external dramas takes her stories to a level above and beyond just a good read. I certainly hope that she writes more novels, because now I have a book fix that only her characters from ancient times can satisfy! Highly recommended.