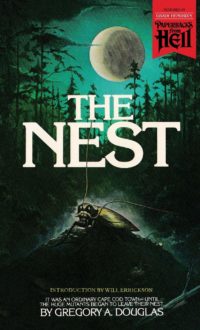 Something is festering in the peaceful New England town of Yarkie. Foul winds are blowing; mutated roaches, horrific in their alien menace, now stalk the woods, having been spawned and transformed by a mixture of time and chemicals in the town’s fetid dump. One by one, these creatures find the hapless residents, both the criminals and the innocent, devouring them until at last the carnage can no longer go unnoticed. By then, it might be too late. The woods are alive with the restlessness of millions of moving, thinking, organized mutations, and the remaining humans are both outnumbered and outsmarted.

Combining 1950s-like B-monster action with the lurid tastes of the 80s, The Nest is a novel that knows it’s in the worst kind of taste and runs with it from the gushing gore to the unfortunate attempts at humor. Normally, this description in and of itself would be the equivalent of praise from me. Corny horror and creature features, a staple of my teenage years, remain both nostalgic and oddly appealing. When I first discovered The Nest then, in a random lot of eBay finds, I tucked in for a treat. Cockroaches and death – the icky and the endless all rolled into one unassuming paperback. What I didn’t expect was that the novel thought it was somewhat stylish, rolling around words like phantasmagoria in the midst of sequences where large bugs (not giant, alas) gouge out the eyes of their prey while drilling into the soft brain tissue. Gregory Douglas then wants to combine the immortal language of Shakespeare with major roach carnage and overdone nautical themes. Please, God, no. It’s just so bad that . . . that it’s bad. 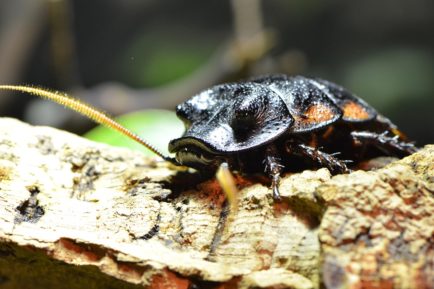 There are so many flaws from the pretentious writing style with its flaunted and out-of-place vocabulary to the stale roach bate (oops, sorry, characters) to the hmmm-should-I-go-into-the-dark-and-menacing-woods-utterly-defensless-to-learn-about-those-blood-curdling-screams plot holes to the attempted faux-science lectures to the endless rough-old-sailor routine. It’s enough to make you want the roaches, a mere six inches and only really scary in their mass and with their overpowered bone decimating mandibles, to win. It’s so lame it’s not even fun anymore, and guess what, there are over three hundred pages of tediously attempted and failed characterization alongside an eye-rolling romance with the usual misunderstandings, plus a really unique and surprising scientist because (gasp) she’s a woman and (double gasp) she’s pretty.

The roach action, at least, does start early and while the oddly hokey atmosphere has a certain innocence to it (queue the old timey black and white movies such as The Blob and – most excellently – Godzilla) the gore is all out 80s. Mind you, it is repetitive gore but here, at last, the book delivers on its back cover blurb. You know it’s going to be rough when an adorable dog is the first victim. What you don’t expect is the disturbing sequence of the roaches vs a beached boat full of children. You think that Douglas will pan away here, but he knows you came for horror and bad taste, and he gives it to you. So, the novel has guts. Quite a lot of them, actually.

What it doesn’t have is a sense of fear or characters who are remotely intriguing. The characters are just too dumb and too easily lumped together. The cast is huge, mostly composed of Old Salt sorts who are interchangeable and annoyingly worshipful of the two Harvard scientists who are called in to secretly save the day.

The scientists are somewhat better characterized (we can, at least, remember their names) but they make the usual mistakes. Peter Hubbard, the main scientist, after seeing the roaches decimate pretty much everyone and everything, suddenly has a desire that, for science, he must now save the roaches, at least long enough to document the nest itself. But, of course, he will do this with no backup and a plan that’s about as air tight as a dried out Swiss Cheese. Wanda Linstrom, the other scientist, is merely eye candy for the men in the book who marvel that she is intelligent and does more than the two other female characters, who spend the entire damn book making chowder, cleaning, and staring ahead bleary eyed from their various crushes and the jealousies the sexy female scientist inspires. The men, meanwhile, are being all manly by making no plans, antagonizing the roaches, and then being quite shocked that the roaches have eaten yet another of their slow moving, unprotected entourage. In the end, we even get a bit of Friday the 13th thrown in . . . the villain is dead . . . wait is he . . . let’s just cut to a sex scene and hope that he is . . . . also, let’s throw away ALL the weapons and split up too. Infuriating.

And so, while the characters are still trying to figure out an alternative to a really big can of bug spray, we readers are left with no doubts whatsoever why this story is out of print. It’s a pity too since cockroaches are scientifically quite fascinating and I was looking forward to a blend of science and campy horror. But I got all camp, too much camp, and in the end mourned the time I’d spent slogging through these tediously repetitive pages. Run, don’t walk.