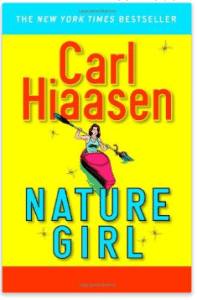 Have you ever just wanted to act out? Ever fantasied about, say, an elaborate scheme of revenge, structured not only to rectify the injustice, but to right the world or at least change the opinion of that offending individual until they are just truly sorry? For all those moments where you longed to be absurd, borderline bi-polar Honey Santana fulfills that ridiculous inner need in us all. When Boyd Shreve, womanizing telemarketer and general louse, interrupts Honey’s dinner with a smarmy sales pitch, ending with an argument and some name calling, Honey decides to exact some revenge and teach Boyd about the beauty of nature, the meaning of life, and the effects of rudeness and just plain ruining someone’s dinner – night after night. As Honey’s ex-spouse and 12 year old son know – this is certainly not the only time she’s gone off on a tear and when Honey starts looking for plane ticket money, it appears that she is once again at her most unbearable.

When Boyd himself receives a telemarketing prompt tempting him to take a nature vacation he sees this as the perfect time to get away from his overly amorous wife and spend some time with Eugenie, his apathetic girlfriend. Little do the two suspect that the special journey was arranged for and set up by one very special lady with a grudge to bear and some ruined mealtimes to prove it.

Meanwhile, as the separate stories converge and our convoluted characters head to Dismal Key, Sammy Tigertail (the son of Tommy Tigertail, Seminole Indian) is hiding out in the wilderness, haunted by voices and images of the dead – specifically the corpse he dumped in the nearby river. Gillian LaCroix, buxom college co-ed is more than elated to run into this fugitive and has high hopes that he will take her hostage. But can Sammy deal with guilt and an overly talkative teenager?

Trailing behind Honey to mitigate the damage, her ex-husband Skinner and wounded boy Fry discover that they are not the only ones seeking Honey. Deranged sexual predator Louis Piejack is lurking through the woods, shotgun in tow, looking for true love. Oh yeah, and there is a private investigator too… but enough craziness for one review!

Following Hiaasen’s usual comic genius, this three hundred page novel packs a lot of action, humor, absurdity, and even some morals. As always devoted to the beauty of nature, the stupidity of tourists, and his typical anti-development streak, Hiaasen uses Honey as a catalyst for a lesson (albeit slight and definitely not heavy handed) to the reader. And that’s nice, and all that. But let’s be honest folks, we’re here to see just how strange things get, how remorseless Hiaasen’s demented sense of humor can become, and how all of these separate, compelling characters and their storylines converge onto one small, abandoned island. Did I mention the cult as well? Oh well, got to leave you some surprises.

The audio book edition, purloined by myself and the boyfriend for another road trip, is read by Jane Curtin and, frankly, is the only way to approach the witty, local flavor aspect of Nature Girl. The accents between characters are all represented differently, creating the sense of a full cast which is a feat in and of itself. The emotions, neediness, and panicky aspects of various people (and the down-right wimpy aspect of Boyd Shreve) are well represented in the oral storytelling venue, bringing everything alive and encouraging readers to just go for it and laugh out loud.

Between the generally amusing nature of the characters and the fluidity of the narration, Nature Girl spins a web of intrigue that gives readers the patience and the desire to see how all of these disparate characters and complicated stories converge. At first, we just have to wonder – how can Hiaasen tie a bipolar woman, a telemarketer, and a Seminole Indian into the same story together and have it make sense in his usual weird, wacky way? What to do with the apathetic girlfriend and the college co-ed and all of the other secondary characters who just delightfully spice this mishmash of Florida dysfunction. In the beginning, I was too busy laughing at the scenarios to care and by the conclusion, I was too caught up in the drama to wonder how, somehow, Hiaasen created this small, tight space and peopled it with characters who, normally, wouldn’t interact.  Plus, the rampant absurdity of getting justified revenge on every annoying person who skims into the edge of your day is just an amusing concept in and of itself, one that bubbles with the potential for hilarity.

The characters too, while larger than life in their situations and even in some personality traits, are oddly down to earth as well. We just like them, care about them, and think about them and their exceptionally bizarre predicaments when forced to close the book (or, ok, pause the recording) to do that annoying life stuff. Captivated by a rich atmosphere and that gritty, realism of Hiaasen’s Florida adventures, Nature Girl is a schizophrenic tale about a bi-polar woman bringing together a group of rag-tag individuals to teach them about nature and manners which ends up being an often funny, often touching drama of survival and ultimately loyalty. Yeah, you’ll laugh, and you’ll probably gasp in a few places and maybe even sentimentally tear up at some as well. Another personal favorite from the author of the absurd. Highly recommended.