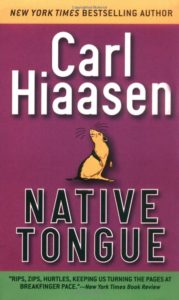 What Do Mango Voles, Amusement Parks, and the Mafia Have In Common?

Combine extreme environmentalism, the mafia, theme parks, and dedicated albeit down-and-out anti-heroes, and you have the explosive recipe that produces Carl Hiaasen’s Native Tongue. Ashamed of his big-developer father, stunted journalist Joe Winder has exited his career with considerable scandal and is now forced to work for a cheap Disney knockoff –  Francis X. Kingsbury’s Amazing Kingdom of Thrills. With rides not up to code (including the Wet Willy and its mold problem, plus its unfortunate shape and construction of latex), slapdash dudes in animal costume, behind the scenes toking, and good cops gone bad posing as security, you have a “family friendly” environment built on lies and questionable adherence to building codes. But, it gets worse; tacky mogul Kingsbury with his Micky Mouse getting fellatio tattoo is determined to sell off more of the ever-vanishing Florida Key’s natural resources to build a glitzy golfing pavilion nearby. All of the animals, trees, and natural beauty will be heartlessly demolished for a quick profit. Can Winder really stand by and watch that again? Even more pressing, can he keep writing up fake spiels to cover up for Kingsbury and the Amazing Kingdom? Just as his conscious comes to a crisis point he runs into a radical environmentalist agency, co-run by a gun-happy granny and a crazed ex-Florida Governor who has taken “gone native” to a new extreme.

Crazy with the usual sardonic vim of Hiaasen, coupled with outlandish circumstances, outrageous characters (we have a phone sex operator intent on writing literary erotic poetry and trying it out on her customers plus a steroid ravaged rent-a-cop who likes to take his drugs by IV), and the perfect culmination of realism and surrealism, Native Tongue is everything you love about Hiaasen’s wacky personification of Florida. What it’s not, however, is his personal best. Always intent to put a jab of politics or personal ethics in amongst the irreverent foibles of his hapless characters, Hiaasen goes a little too far here. He keeps the comedy ribald, edgy, and raw, yet readers get the sense, especially as the novel goes on, that ‎Hiaasen is getting preachy, especially when he elevates the gun toting, trigger happy granny as a true hero, despite her use of everything from violence to kidnapping to save nature – and the Blue Tongued Mango Voles.

Along for the ride there is Pedro, the second part of my “gee, Hiaasen, this one’s just not my fav” vibe. The steroid overloaded guard is overdrawn, his comical appeal edged with that “trying too hard” motif that is unmistakable. Always with an IV pole along to keep pumping the steroids, he even sucks directly from the tubes (constantly) and at one point chews off his own foot (it’s . . . complicated). Bad guy Pedro is just too comical to be funny… too over-the-top.

Indeed, a lot of the characters are larger than life but not in Hiaasen’s usual charming way. Winder’s former girlfriend, the sex phone operator, serves no purpose in the story except comedic relief which soon starts to feel like a device. Jim Tile (yeah, for real) doesn’t come into the story enough to fit the seemingly big role he gets later, plus his name drives me crazy. Kingsbury is too gauche and his agent too much of a suck-up. The extreme environmentalists are too extreme as are the scheming burglar duo they team up with. Perhaps it was the constant preaching, but more than likely it was the fact that the narrative was trying so hard to be absurd instead of just flowing with Hiaasen’s usual dynamic, off-the-hook craziness. Usually, he makes us believe and love him for the weirdness that we just lap up. This time, however, we know it’s a story and we stay outside of it. Interested, yes. Laughing, yes. Outside, distinctly.

Despite my qualms, don’t get me wrong, Native Tongue is a good read and a fun book overall. Hiaasen’s own genius hurts him here since I’ve been spoiled with such offerings as Razor Girl and Skinny Dip. But I still laughed, guffawed, and enjoyed the hectic hijinks of this schizophrenic amusement park world. Good for a laugh, thoughtful, and most importantly another epic where the lovable character of Skink gets some serious, much deserved, page time.