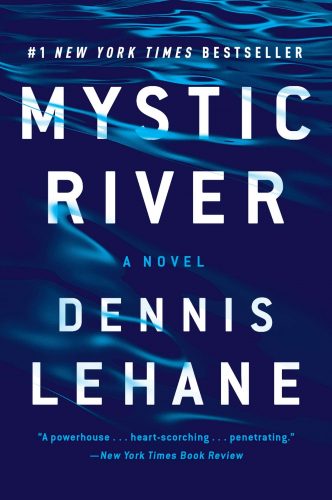 The Lies That Bind

I discovered Dennis Lehane through Book of the Month’s recommendation of Since We Fell. The book languished on my shelf long enough for me to completely forget the premise and to be excited and surprised at every turn. What I thought I was getting was the standard thriller, what I got was something darker, sexier, more gritty and ultimately more surprising. I was hooked. That’s when I saw that Lehane’s claim to fame was Mystic River, a title that had a ring of familiarity to it.

Of course, all you movie goers know why that title sounded so familiar. But I was a newbie to all this when I started up my next Audible purchase, Lehane’s earliest and supposedly greatest work. It focuses on three boys, each traumatized, and follows as they grow up in different spheres, interacting with one another through something no less dire than murder.

First there’s Jimmy, a brash young kid, in love with danger and flouting rules. Jimmy is from the wrong side of the tracks (literarily) and hardly belongs in Sean’s life. Sean is mostly a good kid, a little in love with the danger and wrongness of his death-defying friend. Sean only knows Jimmy because of their fathers’ strange work friendship, which has crossed the boundaries of class. Jimmy will grow up to be a criminal. Sean, a cop. The glue that binds the two together forever is Dave – the tag-along friend, the nobody, the forgotten one – who on one fateful day is kidnapped. Jimmy and Sean, both tough in their own ways, avoid the same fate and watch their friend driven away. Only Dave, the follower, gets in the car that day. And that’s when everything changes. All grown up now, Dave seems ok. But can he ever overcome the childhood stigma and the darkness that attached to him in that car, that follows him now, that whispers in his ears?

Now, all these years later, Jimmy’s daughter has been brutally murdered. Sean is the cop on the scene, trying to piece together what happened. And Dave – well, the night of the murder, Dave came home covered in someone else’s blood with a strange story. Only his wife knows, and she is covering for him. For now. But is it really all that cut and dry, the filaments that bind these friends together even now, the lies and desires and choices that keep on haunting them?

Unlike Since We Fell, Mystic River is a depressing, dark story from the first page. Even the children’s recalled friendship has a whiff of brimstone to it, the fragile connections fracturing because of place and class, of who belongs and who doesn’t. What follows is a story with pedophilia, rape, murder, and mental issues as well as the more indefinable burdens of grief, fear, broken relationships, and the murky idea of justice. Each of the three boys is equally down on their luck. Jimmy has lost his daughter, Sean his wife, and Dave lost himself many years ago in that car.

What follows is a story where the author plays with you. You think you know what happened. You even think that you know why. But something about it is too obvious, and this is where the game comes into play, the taunting. Ultimately, we know nothing, and the final reveal drops once again into the futility of connections and impossibility of frontier style take-it-on-yourself justice. Sometimes, it really is just being at the wrong place at the wrong time. Sometimes it’s a confluence of bad choices and happenstance woven together.

Ultimately, despite the genius of the story and its levels of complexity, however, it didn’t have that same memorable quality that first attracted me to Lehane’s work. I think this is because the characters, with all their flaws, are a little too dark, too depressed and distant and swimming through a grimy world to ever really connect with us on a basic human level. They are symbols of tragedy and as such, we keep them safely at arm’s length. No desire to bond here, no calling to step into the story. If anything, we want to pull back until it is all forgotten, until the cesspit closes back over itself. It may be realistic (or unnecessarily nihilistic, your choice) but it is certainly not a mood we want to court, a story we want to live in.

Ultimately, too, the conclusion is a little too happenstance, too ultimately hopeless. It’s all for nothing, and those children we started with are still doomed in their own ways, still stuck at the crossroads of selfishness. The story is well told, the drama laired, but something here just isn’t quite right. We enjoy it, a little, we recognize quality, but ultimately, we just want to close the book and sigh with relief that the oppression of the story, the weight of everything, is over and can now be forgotten.