My Not So Perfect Life 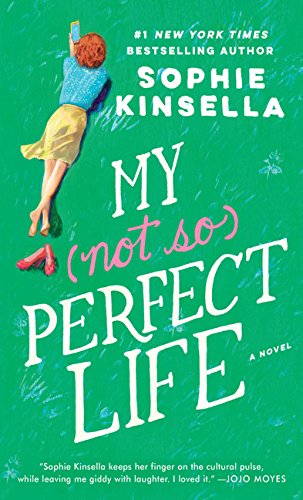 Katie Brenner grew up on an idyllic Somerset farm, but she has always craved the bustle and excitement of London. She has recently managed to land a job in a prestigious London marketing firm under the tutelage of Demeter, a woman who has it all: a perfect family, luxurious home, a young stunning lover, and the kind of swagger that just screams confidence and success. Someday, Katie will have all that too. In the meantime, she’s changing herself from country Katie to sophisticated, city-hip Cat. Her parents may have their doubts, and her father may be hurt that she chose the city over him, but Katie is determined to make it, to prove herself and earn her place in her dream world. And so, it’s not that her Instagram posts of fancy city life lie so much as that they are building the image of the life she is working towards, hiding the tawdriness of her weird flat mates and the not so glamorous tasks Demeter actually gives her.

Katie’s hoped-for world comes crashing down when she gets fired and is forced to go back to Somerset, ostensibly taking a vacation from her firm to help her parents start their new glamping business. She can’t admit she lost her job, can’t give in to her father’s opinion that London is bad for her, can’t stop trying for the life that she has always wanted, and most of all, can’t admit that the life she said she had was a lie. As days become weeks, however, the lies become harder to sustain, and when one of the glamorous new guests turns out to be her ex-boss, the unrecognizable country Katie decides to topple her idol.

My Not So Perfect Life starts out with hilarity. We have the usual, realistic Kinsella situation, focusing on a chipper young girl trying to fight her way to the top. This means taking all the grungy jobs (including dying her boss’s hair on demand), navigating the thorny world of office politics, living in a squalid apartment with unusual roommates, fighting through the daily tangle of angry commuters, and snapping pictures of other people’s fancy drinks for her Instagram life. Soon, however, the story turns more serious as Katie finds a man who just might be her soul mate (and also happens to be a partner at her firm). As the humor turns to romance, Kinsella shifts the playing field. A down-on-her-luck Katie returns home and faces the anxieties and emotional turmoil of the unemployed. While there are amusing moments and events, the story mostly focuses on a young woman trying to realize her dreams while hiding her failures, alone and isolated in her lies as she discovers the rough truths of the world and her place in it.

When Demeter, who has already forgotten Katie, arrives as a guest and the torture-the-old-boss plan gets put into action, I expected this to be one of Kinsella’s best, most laugh-out-loud scenarios. But it tries too hard and is then over too quickly when Katie poignantly learns that you can’t always believe what someone projects. The story then transforms as Katie and her old boss team together to discover something larger than either of them. It’s heartwarming, in the way that only Kinsella could pull off, occasionally funny, and ultimately beautiful albeit a bit maudlin. We have romance, family revelations and reunions, friends and enemies, misunderstandings and good intentions gone bad, fear of opening up, and the realizations that life isn’t an Instagram story (no matter how hard you try to make it one).

My Not So Perfect Life is a buoyant read, fun at times and serious at others, a real-life rollercoaster that entertains and amuses at the same time. I would have personally liked to spend a bit more time (and more realistic effort) in the revenge-on-the-boss department, but otherwise this wholesome story of growing up is another wonderful offering from an author who never disappoints. I also kind of want to go glamping now. . .