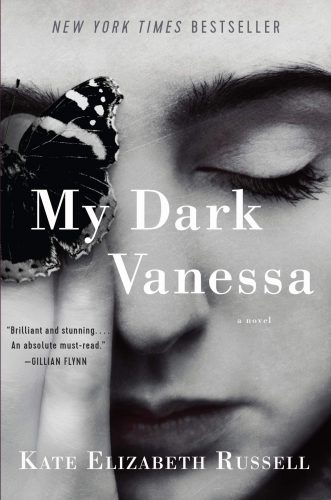 In light of the #MeToo movement, against the backdrop of a modern-day Lolita, Kate Elizabeth Russell unspools a dark tale of power, lust, and lies. In 2000, 15-year-old Vanessa has a crush on her high school teacher, Jacob Strane, a man who seems to genuinely care about her and compares her dark hair to falling leaves. But is Vanessa, with her bravery and love of the forbidden, getting in over her head? Is she experiencing an epic romance that will define the rest of her life, or is she being groomed as a victim, an older man shaping her burgeoning sexuality and womanhood into a trap for his own pleasure and edification?

My Dark Vanessa is a powerful story, all sharp edges and concise lyricism. It juxtaposes 15-year-old Vanessa, who even during her seduction is half repulsed, with the adult Vanessa in 2017. In the middle of the #MeToo movement, another girl has accused Jacob Strane, and this girl has gone public. She has reached out to Vanessa, has forced her to walk the halls of memory, to consider that her special, life defining romance and weird, ongoing friendship with Strane was just another event in a long series of abuse. That’s when Strane calls, seeking solace, ensuring Vanessa’s continued silence.

Vanessa is a difficult character to like, yet it is impossible not to empathize as her hard-edged adulthood, her sinister caviler manner, is backlit by her fall from grace. There are moments of definite eroticism, but most of the encounters with Strane are seedy, stark, a dream transmorphing into a nightmare with a confused young girl at its axis, wanting to believe in the romance, the rebellion, in her own specialness, her own chosen nature. Yet, here it all is now, laid out in black and white, and as Vanessa looks over her life and her failure to keep a relationship, her inability to open up to other women, to recognize that what happened to her was nothing short of a crime, her feigned indifference melts into a confusion that refuses sadness.

It’s a beautifully told, although horrible story. Vanessa is brought to life and although I never liked her, per say, I empathized with her. Vanessa is no hero, and her transition to understanding will be gradual and incomplete, her ability to connect with others who experienced the same trauma an imperfect, grudging curiosity veiled in animosity and denial. Yet everything she feels, everything she exhibits, everything she does, has a ring of truth to it and creates the greater picture. How can such a thing happen? Easily, horrifyingly, inexorably. How can a young woman accept this happening while rejecting that this entire encounter was rape? Again, easily.

Russell couches her narrative in the dark spaces, with occasional glimpses of light that throw just enough grey across the story to make it even more hopeless and depressing. Yet, like Lolita, a book that My Dark Vanessa pays homage too, it’s a story that needs telling, a topic that needs to be plumbed. Consider it a warning, a call to action, and also an acknowledgement of the horrors many women and girls have faced. There is something breathless here, something sordid, and yet oddly beautiful in the brutality, honesty, and acknowledgement that it’s ok to not end a tragedy with a happily ever after. Highly recommended, but beware, there are many triggers here.