Mysteries and the Literati at the Algonquin Round Table 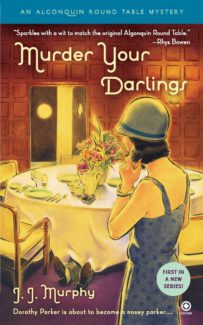 The who’s-who of the literary world, from fancy magazine authors to critics to poets all gather at the Algonquin Round Table for a bit of daily tête-à-tête and sarcasm. Imagine their shock then to discover a dead body – of a not so nice rival – stowed under their exclusive diner digs. That’s one way to ruin a meal.

Enter the elusive William Faulkner, just a poor southern boy on a trip to the big bad city. He just may have seen something he shouldn’t have too, and it’s up to the members of the Round Table, namely the smart mouthed, risqué yet motherish Dorothy Parker to rescue him from hardened NYPD cops and booze pushing gangsters alike.

In a nod to the cozy mystery genre, J.J. Murphey plops an outstanding amount of bygone literati at the scene of a crime with Parker as the lead amateur sleuth. Dropping one liners and witticisms as she seeks doomed romance and a killer, Parker is ready to play this up if only for the amusing quality of dead bodies and adventure. If she has to protect the bumbling Faulkner, renamed Mr. Dachshund, along the way, so be it.

The cozy mystery genre really knows no bounds. Absolutely anything – no matter how absurd – can be the focus of this no-holds-barred semi-new form. Literary figures from bygone days can swagger in with their history ready for a complete rewrite (or ok, reimagining). What makes it cozy is the concentration of character and scene or in this case comedy and character.

Now, as a once upon a time English major and someone with a masters in creative writing (I secretly hope to pen a book of my own someday) who now works as a technical writer/communications person by day, I was surprised and more than a little embarrassed that I had no idea who most of this name dropping cast of characters were. William Faulkner, I knew. Dorothy Parker’s name sounded familiar although her works I couldn’t recall. The other seemingly endless list of those grand enough to sit at this fancy table – not a clue. Not a clue. This meant that a lot of the history and cleverness was lost on me. Perhaps it’s because poetry is simply lost on me (I know – major character flaw) as is most of the professional critics of the days and other non-fiction magazine personalities. I didn’t even attempt a little foray onto Google as the endless name dropping and introduction of these historical figures was . . . well . . . endless. No self-respecting book needs 20+ characters. It’s too much.

And so, I started the book with an attitude and with nothing but annoyance for the endless, often inappropriate quips. I get that in a cozy mystery murder is treated dismissively and the victim is little more than a plot device, but Dorothy’s lack of sensitivity is off-putting, at least at first.

I refuse to be defeated by a book, though, and kept reading. Ultimately, as gangsters came into play and the cast thinned out a bit and Dorothy herself took on a more personable edge, I was glad I had continued. This won’t be a series I return to, but I did start to have fun and get into the swing of things. The hilarity of the situations, the fast paced noir-ish action, the mounting investigation alongside the introduction of an assassin. The general fun of the chase. It did get to me. It was partly an attitude change on my part and partly the book finding its feet and relying less on boasting about its fancy characters and more on just pacing the story.

As with most cozies, a lot of the misdirection and amateur sleuth decisions are less than wise, but Murphy keeps them in character and even we skeptical readers find ourselves rolling along pleasurably with the action. I actually passed this book onto a work friend who appreciates the history behind the personages and the events (indeed, on her vacation she went to see the actual famed Round Table) and she is thoroughly addicted. Ultimately, whether this particular mystery is something you will enjoy and then forget or get completely addicted to depends partly on your knowledge of the times and the characters. Recommended to select audiences who are already in the know about this time and these characters.