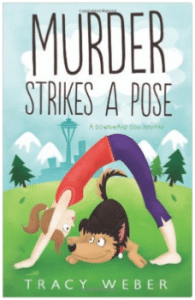 Taking Corpse Pose to the Next Level

It’s difficult to have a relaxing Shavasana and a successful practice when a homeless man selling newspapers and his giant, vicious German Shepard take up residence outside your studio. Beleaguered financially, trying to make a go of her dream business, Kate can’t afford to lose customers or her trademark Zen cool. Determined to both practice and preach the essence of yoga, she seeks to help George, the homeless man, while saving her dwindling business, only to discover a strange, haunted new friend. When George is suddenly killed, Kate inherits his troubled canine companion and a mystery she cannot let go of – despite its cost to her own personal safety. Meanwhile, Bella the dog leads Kate to explore her own emotional limitations and commitment phobias as a small cast of friends and family champion Kate through the murky world of murder.

A beginner (very amateur) yogi myself and a devotee of anything with the cozy mystery label, I deliberately set out on a prowl to see if two of my favorite things could be combined. Stumbling onto this book with its kitschy drawing, smiling playful dog, and elegant downward dog posture, I knew that I had to try it. It’s a cozy mystery, with animals, with yoga, and a quaint little cover. Really, what more can you want?

Well, actually, quite a lot. As Tracy Weber’s debut novel, Murder Strikes a Pose has a certain level of humming potential, like a posture that is close to alignment. Yet the bones never set and we’re left wobbling around with all of our graceless amateur characteristics uncomfortably exposed.

Yoga itself only appears as a sideline. We spend very little time with Kate doing yoga and when she does, or leads a class, her descriptions feel added in, as though this is an expected theme that must be delivered yet doesn’t fit with the surrounding action or even mood of the piece.

For a yoga teacher, Kate is hardly what you would expect. Where’s the peaceful spirit, the aestheticism, the healthy eating, the, you know, yoga pants and all the stuff that goes along with it? Where are the moments in a dark studio resting on hardwood floors, rooting down in tree or exploding into an expressive bow pose? Can’t we get a little of the tourist stuff at least – you know, some incense and a few statues of Ganesha? Some mood lighting? Some of that healthy herbal tea they always have brewing in the background . . .

Kate herself is stereotypical and her relationship phobias and commitment traumas including the daddy issues that keep her back from a stellar relationship with the pet store owner next door are so predictable, so trite and been-done-before. Nothing is unique about the characters, nothing stands out that makes them different, more expressive, more intriguing, or even cozier. They’re all just sort of, you know, there, flopped over in corpse pose in the back while the good stuff goes on in the next classroom – the one we’re not in.

The mystery is sluggish. Bella, the dog, is the only addictive element and perhaps that’s due more toward my insane love of fluffy animals and redemptive animals-saved-from-the-shelter stories than anything exceptional about Murder Strikes a Pose. Kate talks about investigating but there is little progress and more almost-romance and bad Bella action than clues. In the conclusion, the killer reveals him/herself (haha, I won’t give you a clue) more out of sheer exasperation and an ego-complex than as a direct result of Kate’s very limited sleuthing attempts. Let’s face it. Kate is bumbling, inept, and confused to the point that readers are simply bored. Her down-to-earth nature is nice, perhaps even more realistic, but certainly not as dynamic as it could have been with some rudimentary investigative/deductive talents thrown in for good storytelling measure.

I’ve been reading this particular cozy mystery for several months, tugging it along to read before yoga class (and ok, sometimes during cobra too because you need something to do while holding a pose.)The novel was never offensive to readers. It wasn’t the type of book that requires one star and a rant. It didn’t elicit any strong feelings and if I didn’t remind myself, I often went for days forgetting to read further. As with many “just ok” stories, reading was pleasant but the memory of the story and the characters soon diminished after closing the book. Kate may have struck a pose, but the posture was slapdash and confused, never knowing what it wanted to (or was supposed to) be, leaving readers merely ambivalent at the conclusion.