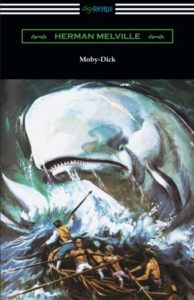 Tedious Torpidity with a Hint of the Sublime

My self-induced classics kick, also known as all the books that I somehow missed reading during school, threw me a curveball when the dreaded Moby Dick surfaced as the next random assignment. Lauded for both its complexity and literary references, few think that Melville’s posthumous masterpiece (at the time of his death it was out of print and grossly unpopular) is an easy read. Having encountered and loved harder authors, such as Dickens, Shakespeare, and Honoré de Balzac, I felt up to the challenge. The Masters in Writing helped. What I didn’t feel up to was the mixed reviews I heard. Moby Dick makes you either a lover or a hater with seemingly no in between. A prodigious book for those who find it insufferable, I wasn’t sure what side of the argument I’d come down on and despite the attempted positive outlook, the slow-paced nature of the plot soon overshadowed its literary merits making this one of the very few books I would ever recommend to be abridged.

It starts with what could arguably be referred to as the most quoted line in English literature: “Call me Ishmael.” From here, Melville’s narrative takes on everything from fate, to race, to perception, to religion, and back again to the root of all human stubbornness – a desire to confront God. Ishmael, outcast crew member and sole survivor is telling his story post disaster, yet his flickering foreshadowing doesn’t give away the details of destruction, merely that hubris and a long journey is involved. Coupled with a cannibal crew member turned new best friend, Ishmael is the clever old owl figure who sees and interprets events which, although in the past, unfurl in a shifting present.  He watches the maniac captain of the commercial vessel who, instead of searching out wealth, is bent on an unauthorized quest for revenge against the infamous albino whale, Moby Dick, who took his leg so long ago. Ahab is outside of the rules and as a daring figure curses everyone from the boat owners to God; despite his inherent understanding of fate and the preludes to disaster that accompany the voyage, Ahab is determined that his own desire is strong enough to conquer all. Moby Dick then is less a prized whale and more of a symbol of both the unconquerable and the incomprehensible.

With all that blasphemous sailor action, superstitions of the greedy cannibal crew, and the irreverent musings of Ishmael, the tale promises both to challenge and to scintillate. And, for people who find the drama effective, apparently it does. Indeed, even for those “haters” in the crowd, Melville still manages to impress every now and again with a poignant, far sighted comment or a transcendent chapter. And just to show you how Moby Dick grappled its way from and disastrous debut and subsequent obscurity, I’ll showcases one of the rare, but unforgettable moments from the text:

“Oh, grassy glades! Oh, ever vernal endless landscapes in the soul; in ye – though long parched by the dead drought of the earthly life – in ye, men yet may roll, like young horses in new morning clover; and for some few fleeting moments, feel the cool dew of the life immortal on them. Would to God these blessed calms would last. But the mingled, mingling threads of life are woven by wrap and woof: calms crossed by storms, a storm for every calm. There is no steady unretracing progress in this life, we do advance through fixed gradations, and at last one pause – through infancy’s unconscious spell, boyhood’s thoughtless faith, adolescents’ doubt (the common doom), then skepticism, then disbelief, resting at last in manhood’s pondering repose of If. But once gone through, we trace the round again; and are infants, boys, and men, and Ifs eternally. Where lies the final harbor, whence we unmoor no more? In what rapt ether sails the world, of which the weariness will never weary? Where is the foundling’s father hidden? Our souls are like those of orphans whose unwedded mothers die in bearing them: the secret of our paternity lies in their grave, and we must there to learn it.” ~ Moby Dick

At his apex, Melville is sublime, as evidently proved through the quote above. Mix in the intelligence it takes to add commentary on all of the major quandaries of life without ever allowing itself to be definitively defined, and you have the reason that Moby Dick clawed its way up to classic status. Just one little problem: if you happen to be on the side of the haters, you can recognize the quality but loath the mode of delivery. That, dear readers, was my experience with Moby Dick.

For every ecstatic segment of perfect prose, 100 pages of un-related factual whaling information followed, interspersed with choppy Shakespearian like stage directions and the occasional emphasis on the overdramatic. Weighted more as a blundering scientific explanation of whales and, dear Lord help us, everything you never wanted to know about whaling in general and Sperm Whales in particular and you have an uneven, schizophrenic nightmare. And, as they say, the line between genius and insanity is fine, which is why sometimes (oh so rarely) the prose hits home. The other 98% of the book, however, is a mishmash designed to torture.

With the ability to practically eat through novels, usually finishing at least one per week with a max of three weeks needed for an extra big tome (i.e. Hamilton) Moby Dick took me over a year to finish – and that was a painful year. My fiancé more often than not found me asleep on the couch, having tried to tackle Melville’s monster to wrestle meaning from it and instead sunk into a coma of whale facts and absolutely obscure revelations into philosophy.

So, as a book lover, an English major, a writer with a Masters, and a library topping several thousand – do I recommend that you read Moby Dick if for no other reason than its classic status and occasional illumination. My stunned reply: no. Just, no. If you must, acquire an abridged copy where all the whaling info is summarized or, preferably, excluded. But since the world is so full of books, and there are doubtless other classics you haven’t yet read, give Moby Dick a miss, or pick up the Cliff Notes version.