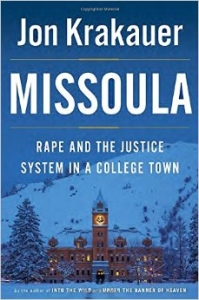 It usually remains a dark and painful secret. But studies suggest that up to 20% of college women are raped during their undergraduate years and the American Medical Association reports that rape is the most under-reported violent crime in the United States. Au contraire, opines George Will, an Oxford and Princeton graduate and one of the nation’s foremost political writers. According to Will, the entire epidemic of acquaintance rape is just a myth perpetrated by “privileged” spoiled-brat college girls and their delusional supporters. After all, who would know more about life on 21st century college campuses than a wealthy 73 year-old scrivener? Certainly not rape victims, their counselors, prosecutors, police officers or social scientists. Motivated by his own ignorance and shocked by the statistics, best-selling author Jon Krakauer has written Missoula, an investigation of how a series of campus rapes transformed the University of Montana.

A city of about 70,000 souls in western Montana, Missoula is home to the Montana Grizzlies, a wildly popular football team in the Big Sky Conference. Like most college football towns, the local residents take great pride in their team, so when the star quarterback is charged with rape, it’s big news. Really big, as in “who’s going to throw the football next season?” big. Unfortunately, this particular case was just the latest in a string of rape accusations implicating football players and other UM students, causing university administrators, the United States Department of Justice and author Krakauer to take notice. Not only did the number of rape cases seem large for a campus of 14,000 undergraduates, but very few of the accused were being brought to trial. Citing “insufficient corroborating evidence”, the Missoula County district attorney’s office was rarely pressing charges.

Descending into this cauldron of controversy – traumatized victims and families, prima donna athletes, crazed football fans, dismissive law enforcement officials – Krakauer takes his acclaimed journalistic scalpel and does what he does best, carves a coherent story out of chaos. Focusing on three specific cases, he interviews many of the key individuals involved and provides eye-witness testimony at the hearings and trials. 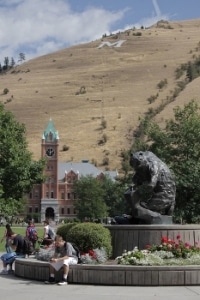 As he learns more about each case and the environment that generated it, it becomes clear that Missoula and its beloved university is simply a microcosm that represents a much larger nationwide epidemic of acquaintance rape, particularly on undergraduate campuses. While most of the book is presented from the victims’ point of view, Krakauer handles this inherent bias adeptly, balancing the story as necessary while simultaneously making it undeniably clear that no woman would volunteer to subject themselves to the trauma and abuse that are a routine part of any rape trial.

Interestingly, Krakauer is not an obvious choice to write about rape. Well known for his best-selling adventure writing, the author is usually associated with mountains and hiking boots. But following the success of Into the Wild and Into Thin Air, he has successfully branched out into more contentious areas such as the Mormon Church, the US Army and Afghanistan, courting plenty of controversy along the way. No stranger to bravery, he captures the inner strength required of these young college women to withstand such harsh scrutiny and public ostracism as they stand up for the truth.

Unfortunately, the book is more exposé than exploration. While the author convincingly dismantles many of the myths that surround acquaintance rape and explains why it’s under-reported, he really doesn’t dig much deeper.   Why is the epidemic happening? What is it that turns a young man into a perpetrator? Is college football – and the adoration that accompanies it – to blame? What about Internet pornography? What should college administrators be doing about it? How can society fix this problem? While the book is grippingly well written and hard to put down, I think that Krakauer missed an opportunity to unearth some of the root causes of this modern day misogyny.

A devastating investigation of the complicated life-threatening issues that face students and college administrators on modern university campuses, Missoula shines a bright light on some dark secrets. While I would have liked Krakauer to dig a little deeper into the behavioral pathology, the book is worth a read for anyone concerned about our nation’s youth.