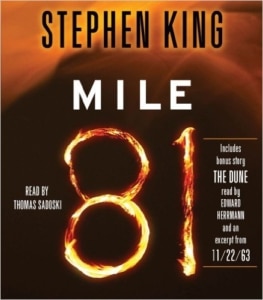 An Engaging Offering from the Master of Dark Fiction

Echoing some of my cherished King favorites, Christine and From a Buick 8, King’s short story, Mile 81 delivers some chills and thrills, combining a plucky child protagonist, an abandoned truck stop burger joint, and a strange mud covered car. When foul-mouthed Pete Simmons, grown-up wannabe, breaks into the hang-out of big kids to impress his absentee brother, he finds an abandoned bottle of vodka and decides to experience the adult world for the sake of some rather good stories. Instead, he ends up sleeping off the effects on a crusty mattress while just outside the abandoned truck stop, a strange vehicle drives itself through the barrier and then sits, waiting. Meanwhile, as Pete dozes amid dark dreams, interstate do-gooders stop to help the stranded automobile, with horrifying effects.

Appended to King’s heart pumping, yet fun evil car chaos, the acclaimed short story “The Dune” ends this collection with a Hitchcock like twist. Judge Harvey Beecher, in preparing his will, relates the secrets he has discovered on a protected island, while looking for treasure. His story encompasses everything from the future to mortality and beyond – to the power of knowledge.

A short, breathless offering, and a good sample of King’s quirky darkness, Mile 81 was a refreshing find. Offering up killer cars (a favorite of King’s) and shady old men with secrets, the novella and its complimentary short story are stunning, both for the emotional ground they cover and the sheer excitement of the revelations. Mile 81 is a little more playful, with a dyspeptic we-could-take-him-or-leave-him hero getting in the way of the more serious elements of the car’s true identity and purpose. Pete takes up a lot of space with his ambling in the rest stop and complaining about being left out. Once the hero goes to sleep, however, and the monsters come out to play, the story picks up pace and tension, drawing readers into to a concept that could be kitchy but instead becomes horrifying and disturbingly dark. Once the hero, the emotionless and too spunky Pete, awakens the sillier aspects come into play as he attempts to defeat the car in order to unveil a heroic tale to other kids. Still – it’s really good and more than a little shocking in sequences. Listening to this while seeking out wedding venues, my fiancé and I got so entangled in what would happen to each hapless helper, and the two young survivors left without parents, that we sped past our interstate exit. The classic result of entering a Stephen King story.

“The Dune” is shorter than the main offering, but entirely worth the time. Unraveling a psychological mystery here, King ditches the straight out monster gore for something subtler and more supernatural. Chilling and well told, the Judge, only briefly met, will long stay in our memories, as will the secrets of those predictive Dunes.

Thomas Sadoski and Edward Herrmann are the perfect narrators for these two, ostensibly different, stories. Capturing emotion, subtly of tone, and the pervading paranoia associated with the unknown, Sadoski and Herrmann take great stories and make them into productions that suck readers into the tales – much like the strange car absorbs its hapless victims.