Madman and the Assassin, The 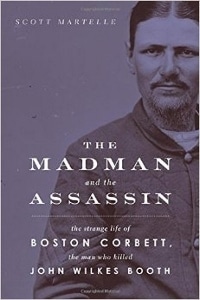 Famous people.  Infamous people.  Ordinary people with a remarkable story.  Any of these can serve as the impetus for a worthy biography.  But sometimes all you’ve got is an ordinary person who just happened to be in the right place at the right time.  Boston Corbett was such a man.  Of modest immigrant origins, his equally humble life was punctuated by a singular event that would place him in the history books forever.  On April 26, 1865, just south of Port Royal, Virginia, Corbett shot John Wilkes Booth in the neck, severing the fugitive’s spinal cord.  President Lincoln’s despised assassin died moments later on the front porch of Richard Garrett’s farmhouse, almost two weeks after that fateful evening at Ford’s Theater. In The Madman and the Assassin, journalist Scott Martelle tells the story of Booth and Corbett and how their lives eventually crossed paths one morning in rural Virginia. 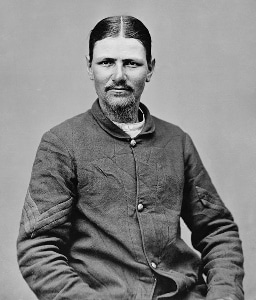 Now killing a man – even John Wilkes Booth – may typically be considered ill-advised, but it doesn’t make you a madman. However, as one digs into the life of Mr. Corbett – a sergeant in the Union Army regiment that was sent to hunt down the acclaimed actor and assassin – a full trunk load of hardship and craziness is exposed. And Martelle unloads it all, starting with Corbett’s loss of his mother at an early age and moving on to his frequent exposures to high doses of mercury during his employ as a hatmaker. The author also describes how the man’s evolving religious fanaticism served as the most important inspiration in his life, affecting his choice of hairstyle and prompting much more severe forms of bodily alteration. In addition, Corbett – an ardent abolitionist – served during the Civil War, spending several months in the hell that was Andersonville Prison, a traumatic experience that certainly didn’t help stabilize his continually deteriorating mental status. 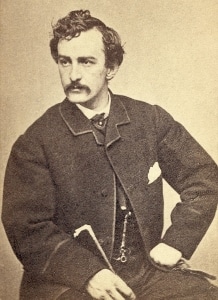 While the story of John Wilkes Booth – from his conspiratorial scheming to his killing of Lincoln and subsequent days as a fugitive – is relatively well known and nicely summarized here, the life of his killer is much less well established. Often dealing with a paucity of conflicting data, Martelle does a good job of creating an interesting account of Corbett’s life, although as the man’s fifteen minutes of fame ends this challenge becomes increasing difficult.

An entertaining account of a minor – and thoroughly bizarre – hero who played a pivotal role in closing out the most acrimonious period in American history, The Madman and the Assassin is sure to please Civil War and American history enthusiasts. However, general readers may find that there’s just not enough story here. While Martelle does a nice job with what he has, Corbett’s odd story provides rather thin sustenance at times. Recommended for buffs only.

photos by Matthew Brady (BC) and Alexander Gardner (JWB)