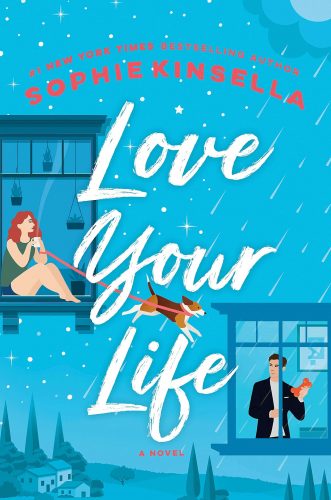 Romance was already in Ava’s mind when she began the writing retreat. Before leaving she’d discussed it with her friends. How love is not something you can stipulate with an app that dictates everything from height to distance, but something that happens, organically. Something that doesn’t bow to “deal breakers” or preferences. So, when the neighboring martial arts class ends up joining the writer’s retreat, Ava soon abandons her novel in-progress for a Mediterranean fling. Only she’s convinced it’s the real thing. Part of the retreat is to use fake names, and with these fake names, comes the ability to let the past, and all its baggage go. This is the perfect relationship. Love is, after all, in the moment, but when Ava returns to London and reconnects with her retreat paramour, she soon discovers that maybe some rules are ok. Maybe some baggage can’t be hidden. Maybe there are such things as deal breakers.

Love Your Life is more of a saccharine romance than Kinsella’s usual comedy with a heart. The premise is set early as Ava engages with her rather grating friends and proclaims that despite her single status, she understands love for what it really is. Of course, she is being set-up for a fall, as is her other friend, who is on the extreme opposite end and dictates everything until she finds (supposedly) the perfect online match that meets her hundreds of criteria. When Ava gets to her retreat, with the mandatory fake names and the unbendable rule that participants cannot tell anything about themselves but must instead concentrate on their art and let it speak for itself, it’s obvious what’s going to happen. It’s not even sweet really, because how can two grown adults behave like this, believe that a long-term relationship is created in secrecy and silence, in not even knowing each other’s names or residence?

It gets progressively more irritating when the comedy is supposed to begin. Back in London, Ava discovers her mystery man has a name (Mat), an industrial house she doesn’t like, friends she doesn’t like, a multi-million-dollar family business he supports and hates, and an ex who will not go away. Mat, predictably, is everything Ava hates, from his morbid taste in ugly art to his show-up-at-the-front-door ex. And that’s just for starters. Mat also hates Ava’s life: her completely uncomfortable apartment with splintered “rescue” furniture and funky vibes, her misbehaving dog, her bitchy friends, and her inability to finish anything. It’s a match made in . . . well, a stupid retreat . . . and it’s not going to work. But of course, Mat and Ava must battle it out in comedy, with all the predictable things happening from misunderstandings to property destruction. This was the bit I had looked forward to while slogging through the romance, but Kinsella’s usual laugh out loud wit is forced here, and the circumstances don’t resonate. Maybe it’s because the characters are childish and irritating, maybe it’s because ultimately, we don’t root for the romance, maybe it’s because it’s just all a little too predictable.

This all leads to a forced ending, a happily ever after that leaves us disconsolate. This is a relationship that even the beauty of fiction can’t heal. The characters shouldn’t be together. Oh – and that trick with the dog at the end, the unnecessary brutality and tragedy of it – not cool.

While Love Your Life wasn’t the worst book I’ve ever read, it is certainly not up to Kinsella’s usual high standards and is defiantly my least favorite of her books so far. The magic is just missing here. Fans will have to read it, of course, but for all you out there looking for an introduction to Kinsella’s works, DON’T START HERE!