Only Love Can Break Your Heart 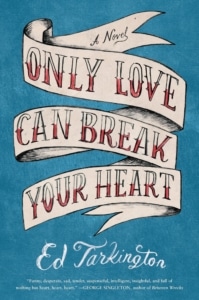 Advertised as one of the February picks for Book of the Month Club, the write-up for Only Love Can Break Your Heart captured my interest with its comparison to The Wonder Years and classical coming-of-age stories. Following the tumultuous youth of Richard aka Rocky, told with painful knowledge and reminiscence, the tale winds through the backbeat of 70s music, family life, and the complexities and limits of forgiveness. Rocky’s hero is his older half-brother, deviant, pot smoking, storytelling Paul with the hot but troubled girlfriend. Siblings united by a father tellingly referred to as “The Old Man” their record playing complimented by lounging, midnight stories, and dares regarding the old Culver house forge a seemingly unbreakable bond of brotherhood. Rocky relishes the attention although his mother, significantly younger than the Old Man (and the Old Man’s original alcoholic wife) distrusts Paul’s true intentions and all the alleged peace of the thriving hippie culture.

The true faith of youth is tested when, on a vengeful binge aimed against stuffy parents and society, Paul’s rebellion takes him over the line. Abandoned, betrayed, and pining to forgive, Rocky is left in the wake of his brother’s seven year absence to grow into a man and figure things out by himself. The lure of the Culver house is still there and with it, the promise of a job helping to look after the barn and horses. While there, Rocky losses his innocence and becomes the lover of the much older Culver girl, passing the years and sparking a string of events that are destined to reawaken the past. When Paul mysteriously returns to town, the boundaries of trust are tested to their fullest as is the power to forgive those who are ineffably fragile and unrepentant.

A sleeper sort of novel, Only Love Can Break Your Heart is juxtaposed between Neil Young, To Kill a Mockingbird like old-houses and neighborhood gossip, and the disillusioned nostalgia of a lost youth. The story, as it is, is less of a story itself and more a beautiful passage of time, waxing between elegance and the simplicity of the inexpressible. The narrative voice is instantly compelling for its distinct sense of nostalgia and its captivating portrayal of very real, and often unfathomable, characters. It would be impossible to read without reflecting on the warm and sometimes sad oscillations of the narrator in The Wonder Years, a sense which is recaptured here yet taken to a darker, more questioning place.

What Tarkington does best is to evoke the sense of a young child, and then a young man wondering “why” and observing events and adult interactions without fully understanding them. Nothing is ever directly said, yet the novel has a direct, palpable feel – a crying out of confusion and acknowledgement that sees underneath the surface of the perceived to something insoluble and murky. Because of this compelling emotion/attitude, I could have kept reading this book and happily following Rocky until his dotage – enjoying this human connectedness and capturing of feelings which are just as universal as they are completely intangible and inexpressible.

Of course, Tarkington is not going to seed questions of the errant Paul without at least providing some answers and action. Paul’s disturbed yet sweet girlfriend returns to town attached to the snobbish Culvers and holding a secret that Rocky must have. Following the revelations are unaccountable decisions and the domino effect of released secrets and the knowledge of power. Rocky has a strange ability to be sensitive and destructive all at the same time, compelled by unresolved emotions about his brother and the cruelty of youth. This leads to further degenerations in family relationships, acquaintances, old friends, and even the union between lovers, showing the cause and effect of how we haphazardly ruin one another’s lives.

As the novel continues, the sleeper nature transforms, eventually becoming, unexpectedly, a blood-curdling mystery that, by its very drama, highlights the more subtle questions of who are we and who do we become. Some readers may not care for the fairly gratuitous finale but I loved it. Bringing literary fiction into hardcore mystery realm satisfied two of my greatest desires from a novel and proved for once and all that Tarkington is a new voice in the field that must be reckoned with.