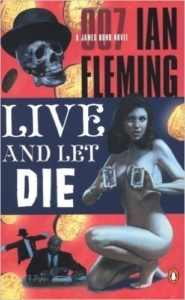 In the second James Bond novel our suave anti-hero finds himself enmeshed in a smuggling scam with international ramifications and the tribal hint of voodoo. Sent by M to investigate a criminal overlord in New York by the name of Mr. Big, Bond finds himself following the roots of the problem back to a long lost pirate treasure in the tropically creepy climes of Jamaica. Along the way, he meets a seductive Fortune Teller, Solitaire, tied to the criminal empire who is charmed into helping Bond unweave the complicated history of lies and superstition surrounding Mr. Big.

Live and Let Die is one of the most thrilling in the Bond series. Combining international intrigue, mafia-like criminal empires, ancient superstition, pirates’ treasure, lone stretches of empty sea, and the isolation of underwater panic, the atmosphere escalates the usual aura of tension and amplifies the immediate danger to all of the involved characters. While less critical than in the movie adaptation (of the same name), the voodoo element here is used as a clever ploy behind which Mr. Big hides the secrets of his private island where exotic (often dangerous) fish are exported along with a little something extra in their tanks. Building upon history, Bond understands the power of suggestion and even references the mind control techniques of fear (which voodoo implements). Immune to suggestive voodoo himself, the atmosphere is still creepy and while the supernatural tinge from the movie isn’t incorporated in the book, the spine tingling brilliance of Mr. Big’s ruse creates an addicting villain whom we love to hate.

My personal favorite moments of this particular adventure involves the underwater segments as Bond scuba dives beneath dark waves to deliver a limpet mine and sneak into a secretive, supposedly “cursed” place. The flashings of large tropical fish and the sinister nature of Mr. Big’s finely acquired dangerous finds (sharks among other awesome monsters of the deep) give the story an alarming immediacy. The descriptions, flamboyant and yet clipped, in the traditional Fleming way, work perfectly to weave readers into the moment. This tropical and slightly spooky Bond is more serious than Casino Royale and while not exactly likable (Bond distinctly has his issues with women and racism) he does certainly feel more relatable, if only because of the continual risks to his life.

Solitaire, the Bond girl for this particular offering, is more of the traditional Fleming flair. A woman who has gained her nickname due to her desired aloneness (and her refusal to have a male companion), this ice queen is instantly smitten by Bond and betrays Mr. Big. It’s not exactly believable, but for the world of Bond it is par for the course, and so readers are along for the ride. What’s Bond without his best girl and compatriot in spying?

The couple mixes sex with mystery leading to a stunning conclusion where Mr. Big decides that simple torture isn’t enough for his treacherous seer and her associated spy. Tied to a boat, drug through shark infested waters and over rocky coral outcroppings, it’s hard to imagine how Bond and Solitaire will escape this particular bind. Leave it to Bond’s ingenuity and partly to the Dues ex Machina of fate and you have a satisfying conclusion with a gory punch.

Be warned if this is your first time to Fleming and the Bond books, however, that the cultural icon of James Bond depicted in the movies, particularly the later films, is drastically different from the semi-villain chauvinist represented here. Widely known, Fleming’s Bond stories have some, let us say, interesting lines that are hardly politically correct, or even particularly representative of the feelings in his own time (1950s). Forewarned readers can still enjoy the intrigue inherent within Bond’s world, and even laugh at the overly primitive statements he makes from time to time. Don’t expect, however, to see the clear cut line of hero and villain in Fleming’s works which tend to examine evil, and even psychopathic protagonists such as Bond, with a wide lens; everything’s in the grey zone perspective. You won’t be into the story for the characters, but you will be into it for the serpentine plot twists, the cleverness of the villains (especially one of my personal favorites, Mr. Big) and the complex exit strategies cooked up between James and MI5. In Live and Let Die particularly, Bond experiences a new kind of loss which leads the novel to be more introspective than usual and more emotional. Recommended, with a warning, and definitely touted as one of the must read Bond books.