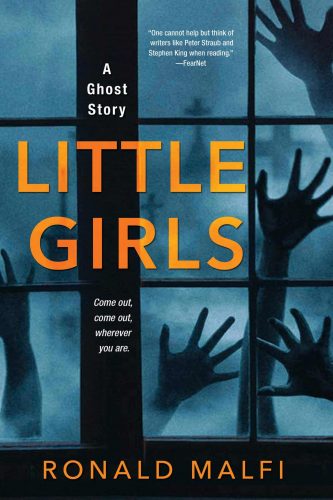 A desperate old man, devolving into paranoia and haunted by his past, throws himself through a window in the attic. He dies in agony and insanity and blood. Now, his old mansion with its gothic charm becomes his daughter’s. But Laurie (the daughter) doesn’t want the house, doesn’t want the memories it brings back, doesn’t want to think about how (and why) her father died.

Convinced by her money-grabbing husband, Laurie moves her family, including her young daughter, to her father’s ancient house. It’s just a temporary measure, only until the estate is settled. She can handle this. She can push the memories back. She can try not to resent her husband. She can spend more time with the child she never wanted. They can be a family. Even here.

But then, there are voices in the night. Strange photo albums. A girl who should be decades dead playing in the garden next door, visiting Laurie’s own daughter, starting the cycle again. Maybe Laurie is going insane, like her father before her, or maybe something lives on here, something that refuses to rest until it gets revenge.

I feel in love with Malfi after reading Come With Me for a book club. Come With Me was a supernatural examination of grief. It had depth and despair, horror and poignancy, in equal measures. Everyone else in the book club loved it too, and so we all chose Little Girls as our next mutual descent into the tantalizing darkness. What we got here, however, was distinctly different, less honed and refined, darker in subject matter (disturbing actually), but less human and far less thought out. The characters are stilted, stuck in their own worlds and only presenting at a surface level. I didn’t develop any connection to Laurie, or her awful husband, and certainly felt no sympathy even for the mistreated ghost, despite the final revelation.

The story is slow. It starts with a grand tour of this creepy mansion and the gruesome details of Laurie’s father’s supposed suicide. It’s a good setup. Don’t most great horror stories start with a reluctant couple buying or inheriting or otherwise coming across a suitably creepy and unrealistically extravagant gothic house? But it’s mostly downhill from here. The house, as much as the author tries to give it a presence, is just a prop, and soon I got tired of hearing about it. Yes, the furniture is super cool, but can we get to the scary bit now? The things that go bump in the night? The vengeful specter that is supposedly the catalyst for all the horror?

Eventually, of course, said specter sort of appears in the guise of the not so friendly, potentially reincarnated, little girl next door. Evil children have never been my preference, even in the realm of horror. Letting a story go that dark, soiling something meant to be precious and innocent, is personally distasteful to me. What is worse, though, is the subject matter here. Malfi depicts the very real horror of pedophilia, and it is not for the squeamish. Not that the acts are described in any detail (thankfully), but the entire subject matter drives the story, seeps into everything, corrupts it and by extension our minds. Some topics are too bilious for entertainment, and our spooky house ghost story becomes depressing. It’s also poorly manipulated.

There are a few confrontations, but honestly, not much happens here, and when it does, only bits of it make sense. There is no explain-all ending. Indeed, the ending itself is the ultimate slap in the face, being both vague and rushed. Laurie and her family never gain our empathy or interest. Laurie’s prattling and diminishing mental faculties, meant to mimic the paranoia around her, make us wonder if the problem is a ghostly one or a mental one, which just serves to drive us further from the character. Who cares what her problem is, what past traumas Laurie faced, and how her marriage is going (or not). It was too vapid, too high level, the usual set-up with none of the heart and even less of the soul. Little Girls just fell flat for me on so many levels. I’ll still try other Malfi tales because Come With Me was so phenomenal, but this one was a disappointment. I am glad that I didn’t read it first.