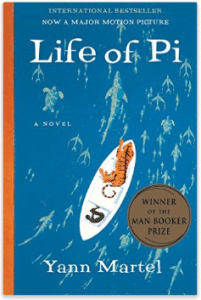 Reality, Destiny, Loss, Adventure: Life of Pi has it All

We are all storytellers of our own destinies and our perceptions inform the realities we see, the lies we tell, and the stories we choose to believe.

Fifteen-year-old Piscene Molitor Patel, who prefers to be called Pi as in the unlimited and ultimately indefinable mathematical number, has spent his entire life in Pondicherry, India, living in his father’s zoo and helping to take care of the animals. From earliest memory, the possibility of anthropomorphizing the dangerously beautiful creatures around him has lead his father to reveal their true danger and while Pi is a realist, he also is a romantic – a boy in search of self. Experimenting with Hinduism, Christianity, and Islam, Pi seeks a meaning in life deeper than the pragmatism of his parents and their belief in the new, enlightened India. Pi is a special boy and while his multiple affiliations and embarrassing proclamations of love for God get him a good deal of grief among his more traditional peers and religious teachers, his acceptance of the incredible will later prove his salvation and his only hope.

Forced by shifting politics and economics, Pi’s family sell the zoo and all its animals, boarding a boat bound for Canada along with much of the zoo life they sold. It’s time for a new life and a new start. When the ship suddenly, violently sinks, Pi is adrift in a desolate cold ocean in a life raft with a hyena, a zebra, an orangutan, and a Bengal Tiger as his only remaining crew mates.

As nature takes its gruesome course, Pi oscillates between the will to survive, the fear of being eaten alive by his animal crewmates, and sorrow at the loss of everything and everyone he has ever known.  Pitting the spiritual against the practical, Life of Pi functions both as a tense, somewhat mystical story of a starving boy lost at sea with a tiger, and an allegory for faith, the sustaining power of belief, and how ultimately the decisions we make are products of our own perceptions.

Pi’s knowledge of animal behavior, his innate sensitive nature to the meanings and physical language of Richard Parker, his traveling tiger companion, provides a complicated backdrop against his attempts to both dominate and tame the tiger. These attempts are strikingly conflicted by the brutal beauty of his world, the delirium of starving at sea, and his transformation from a peaceful vegan to hunter and eventually, briefly but necessarily, into a cannibal. The definitions of moral boundaries and the fluctuation of right-and-wrong provide the crux of a drama more centered on the powers of believing than on the strictest reality – although, one is left with the impression that while amazingly unlikely, such a miraculous journey could indeed, possibly, take place. And then again, our final choice reveals who we are not only as storytellers but as interpreters of the stories that brush against our own lives.

The novel has a transcendent surrealism, a beauty that is both intoxicating and disturbing. The fish as they are dying, shift kaleidoscope colors; the drifting algae island provides sustenance and rest but holds a horrifying secret; the joy of hearing a human voice while blinded by hunger and nearing death gives comfort and a new, awful, challenge; the awesome power and might of a tiger and yet the fear, the desire for the creature’s end and later, a need of this nemesis’ presence quells the loneliness and defines the reason to go on.

In the conclusion of this framed narrative within a framed narrative, we discover the survivor Pi, telling his story to two Japanese officials who seek answers for the sudden destruction of their boat. The investigators harass and continue in their disbelief, and finally Pi gives them another story – one of blood and viciousness and betrayal – and the ultimate point isn’t what happened or what is true, but how our own choices reveal who we are. The story is ultimately one about faith and belief in the impossible and the unprovable but Martel transcends even this concept to note that what we choose to believe reveals who we truly are. It’s an allegory and an adventure in one, and if you don’t cry, don’t struggle with Pi and Richard Parker, don’t imagine the battered boat alone, bobbing on the ocean, then you have no heart and no empathy.

I came to this novel more by chance than intention. I had heard about it, of course, but after seeing the previews of the overly Disney-ish movie with its cinematic boy and tiger depictions, I had long ago decided that this wasn’t the novel for me. Several discs into the unabridged audio book, my opinion was even further cemented. The beginning of the novel is hard to grasp, concentrating on Pi’s religious quests, hitting a very new age note and seemingly staying disconnected from the elements of plot, character, and most importantly, the tiger. After disc three, the true story begins and from there forward Martel has you around the throat, breathless, agonized, invigorated, and completely unable to leave the book. The conclusion takes the sucker punch all the way home.

Getting curious, I decided that since I couldn’t rid my mind of the images painted in the book or the feelings evoked, I would give the movie a try as well – why not? For those of you who come to the book from the movie – expect a different, far darker story. The film is all about cinematography and pomp, even adding in a love story not in the novel, trying to make this into the usual boy-girl romance, leaving home, adventure Robinson Crusoe epic. It’s not. It’s just – not. While the movie is beautiful, it has no substance and only barely skims the novel itself.

Forget everything you know, or even think you know about Life of Pi and embrace the eloquence of despair tinged with faithful hope.

The audio book version as read by Jeff Woodman is a fantastic experience, capturing the emotions and majesty of the drama and evoking storm tossed seas and lonely little boys. Life of Pi is an experience not to be forgotten that will change the way you look out at the calm ocean tides forever. Highly recommended.