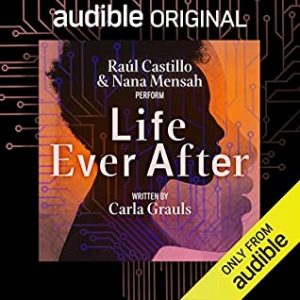 A Story of Tech and Love

In a far flung future, in a place called Tech City, a man and a woman meet. They grow together as they each receive technology implants that will make them better, stronger, smarter, more connected. As the years pass, they merge in and out of each other’s lives, always being pulled back to the waiting room where they met, always following the latest procedures, becoming both more and less human. In this strange narrative, they dance around each other, awareness growing and dimming, friendship transforming to love transforming to enmity and back again.

Playwright Carla Grauls wrote this Audible screenplay and gives listeners a dose of bizarre existentialism that is both self-aware and hyper-emotional yet oddly compelling. It’s not a story I would normally like or gravitate to, and it’s ultimately so smart and moralistic that I never entirely got the point, but I enjoyed it nonetheless. Something about it spoke to me, from the strange storyline to the words and failed connections of the characters.

I listened to Life Ever After one temperate day while I was outside sitting in the dirt, pulling weeds. It’s a weird place to be, in the basicness of dirt and plant life, while listening to a futuristic romance where the characters themselves question their identities as human. It’s ultimately a sad story, a hopeless failure to connect despite all the “enhancements.” It’s a story that speaks about more than just the love/hate relationship we humans have with our tech. At its heart, it’s a basic story of human struggle: of trying to be better than who we really are, of forever stressing about the rightness or wrongness of what we do in our lives, of the desire and fear of bonding with another. Somehow, despite the hyper-reality, the story just works.

Now – if I had been reading this tale instead of listening to Raul Castillo and Nana Mensah’s dulcet tones and the overlay of effective music and cinematic sounds would I have felt quite as pulled in? Probably not. This may even be just one of those instances of the right book at the right time. Still, for a free Audible Original download, I got way more than I expected. Recommended.