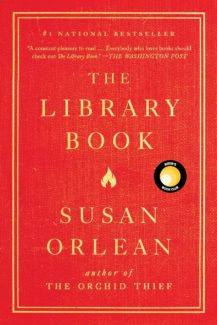 The Secret History of Libraries

Many of us hardcore bookworms still mourn the burning of the Library of Alexandria, and so a book about a disastrous fire at a library (albeit a modern and less destructive example) seems like it would be painful at best, a little anticlimactic and dull at worst. That’s where Susan Orlean’s The Library Book surprises us. It’s a factual investigation into the Los Angeles Public Library fire of 1986, the one actor/suspect who was never convicted, and a look at the history of the library, but it’s also a love letter to libraries everywhere and the sometimes comforting sometimes revolutionary appeal of books and knowledge.

Orlean combines several modes of writing and several focuses: her personal love and memories of library-time as a child (and that semi-magical aura that the first introduction to libraries always has); an investigative journalist’s peak at a decades-old cold case; a true-crime like narrative of suspect Harry Peak’s own strange life and attempted Hollywood journey; a look at the astounding history and pioneers who ran the Lost Angeles Library from the beginning, including some bold female librarians and an especially scandalous superstar librarian; and a journey into the social focuses and expansion of the modern library from initiating programs for reading and writing to supporting the homeless community. In all honesty, it’s not a book I expected to like. It was chosen for my book club, and I felt a sinking sensation at what seemed like a dull non-fiction story focused on an event and a place unfamiliar to me. What I didn’t expect was the growing love and passion the book would invoke, the memories of my own childhood days circling the library for just the right book, the sadly dead dream of one day being a librarian, and the continual love for the power of books and those who protect and share them. In the end, the Los Angeles Library comes blisteringly alive, the tragedy just as heartfelt to me know as though I had been there and seen those precious, irreplaceable pieces of history going up in flame. It’s the magic of writing and reading all combined into one supposedly unassuming book, and it’s a must read for anyone who has ever cherished a library in his or her life. 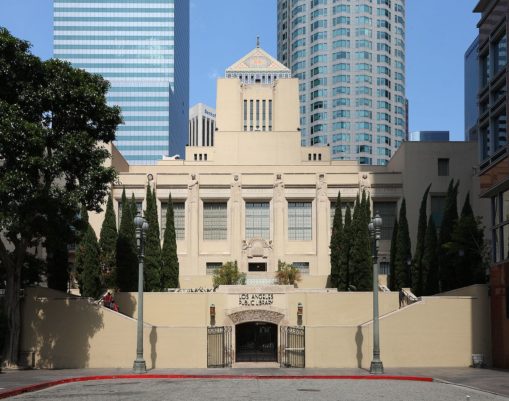 The Library Book teaches us something about that elemental, fire. The Los Angeles Library fire burned at over 2000 degrees for seven plus hours and consumed hundreds of thousands of irreplaceable books, damaging many others. It’s something that on a newsflash would elicit a sigh and then fade to the back with all the other bad news. But here,  we go back in time, through interviews and facts, and see what such a fire would look like, how one work day could turn from normal to tragic, how that would look and feel to employees, to patrons, to an entire city. The soot encrusted library with its peeling walls and soppy, ruined books feels like a real-life inferno and Orlean even does her own book burning experiment, trying to puzzle out how something so big and out of hand happened so quickly.

Juxtapose this restructuring of a fateful day with an even further journey into the past and a look at how the library grew and how it became not only a bastion for books but a place of learning and not-always-so-quite social rebellion. Orleans paints the picture of how the Los Angeles Library was a leading center of advancement for women (back in the days where being a librarian, not just the head librarian, wasn’t seen as a suitable career for the female persuasion) and how its own progress was soon destroyed by the push-back of a board devoted to getting a man on the spot – a famous one. Who ever thought librarians could be such wild characters, devoted to advancements and yet totally, and dramatically, human at the same time!

While we meet the faces and watch the struggles of the library, building up to the day when all its grand efforts culminate in arson, we also dip into the life, true-crime fashion, of Harry Peak, a wannabe actor with a pathological desire to exaggerate. Did Harry set the fire? If so, why? The happy man had a definitive dark side, a desperation and a flair for drama that never helped his case as an actor but made him the perfect suspect, cue his switching narratives. 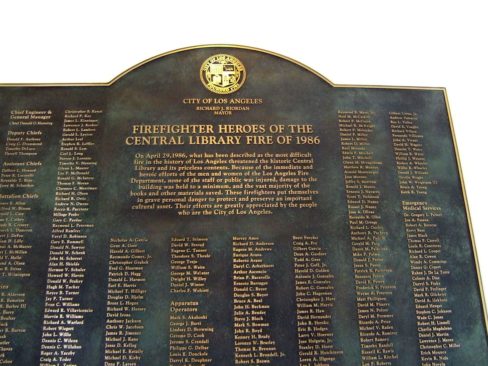 Plaque honoring firefighters from the 1986 fire.

Meanwhile, as the past builds on itself and as Orleans looks at the aftermath of a large fire and the bracing of a community, she gives us a present-day sense of the rebuilt library and answers questions that many bookworms with secret dreams have always wanted to know. Just what is it like to be a librarian? How does it feel to work in a library all day? While books are the forefront (for now), libraries function more as knowledge centers than anything, and with the emergence of computers and technologies, libraries, ever brave and ever providing social services, are surprisingly willing to evolve. Soon enough, Orlean leaves the books behind and shows us just what a librarian must focus on, from helping the homeless to evolving programs that support literacy and every-day necessities, like how to fill in tax forms. It’s a job fit for a hero.

In the end The Library Book is much more than the story of one fire. It’s the story of culture and civilization, of human striving and lastingness, of the evolution and sharing of knowledge, of the beauty of memories and the need to move on and change. Orlean weaves in and out of all these topics, the past and the present, her experience walking the new library and talking to employees about the old one, and how in such a place time touches and overlaps and informs. She takes us on a journey through the people she meets, and even the ones she doesn’t, to paint a vivid, crackling portrait of life and its endeavors. In the end, it’s a breathless love letter to libraries everywhere with one central library, hit hard, that takes charge of the tale and stands in place of an institution that offers so much, against all odds.