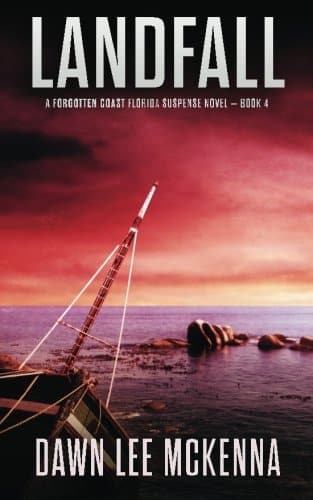 With a hurricane just offshore and Wyatt hours away in the hospital, preparing for surgery, Maggie is on her own. She must prep her house, lock up her chickens safely (including the difficult to catch Stoopid), and shoo her two children into the car. They must leave Apalachicola before the hurricane hits.

So far everything is going according to plan. During Wyatt’s last phone call Maggie was already packed and settling just a few of the last-minute necessities before hitting the road. But when the next day comes, and Maggie and family aren’t there – and the phones are all down – Wyatt begins to worry. Was Maggie stuck in the out-of-town traffic? Did she decide to weather the storm at home? Or did somebody come for her?

Meanwhile, Maggie is held hostage with her two children at gunpoint, trapped in a house with a mad rooster, a growling dog, an unknown man with a vendetta, and a full force hurricane blowing outside. Maggie doesn’t know who this man works for or what he wants, but her children are in danger, and she is willing to do anything – risk anything – to save them.

Meanwhile Bennet Boudreaux, town kingpin and surprising friend of Maggie, has gotten a surprising call from Maggie’s father. What exactly is it between Boudreaux and Maggie? Will he try to save her or is he involved in other, more sinister ways?

Landfall is the fourth in the Forgotten Coast series and one of my personal favorites so far. Dawn Lee McKenna can certainly write; the boiling clouds, devastating beauty, and terror of a full force hurricane captivates us as we watch our now isolated heroes battle both the elements and an unknown avenger. The series certainly has its cozy moments, from the antics of Stoopid to the descriptions of Apalachicola, right down to Maggie’s daily coffee, but by book four, the cozy has taken a backseat to the drama. Maggie has been through a lot, from a rape that shaped her early years as a policewoman to the death of her ex-husband and now fear for her two children. Maggie is imperfect, she has made many questionable decisions, yet she is a realistic person, one filled with strength and doubt and a motherly instinct that can overcome anything. In Landfall she shines in her most dire hour, one she very nearly doesn’t escape.

And Boudreaux, my all-time favorite bad guy with a conscience (despite the penchant for murder and frontier justice): this is HIS story above all. Finally, the tie that binds Boudreaux and Maggie together is revealed and honestly, it’s not something that I never could have expected, but it works beautifully, painfully, poignantly. Oh. Just get me the Kleenex already and let me happy cry a moment.

The peril here is real and McKenna makes this offering all action. Maggie is still stuck in her introspection, but with man and nature against here, Landfall is more of a thriller than anything else. And by four books in, these people are family and friends and yes, our very own enemies too. So satisfying. So serious. So . . . perfect. I can’t wait for the next book to show up in the mail. This little-heard-of, local series is a bombshell hiding behind a pretty cover. A must read!