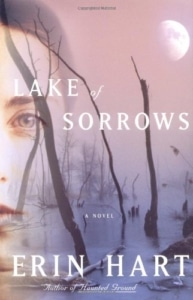 Interweaving modern forensic science with the mysticism of ancient pagan death rites, vengeful gods, and preserved secrets, lovingly hidden in a bog for thousands of years, Erin Hart’s keening Irish mystery series returns with another brutal set of slayings. Nora Gavin, haunted American forensic pathologist, returns to Ireland to autopsy a newly unearthed Iron Age bog body, an ancient victim of a triple death rite. Trembling between her intense feelings for Irish archaeologist Cormac Maguire and her promise to her dead sister, Nora’s emotional state colors the mire of peat and buried death around her with an invasive sense of sadness and continual failure.

When a new body, also bearing signs of a brutal triple death, is discovered in a sinkhole nearby, this one a contemporary, the mysteries of the past give way to a sudden splurge of eerie present killings and rumors of priceless hidden treasure.

Invested in solving the current murders in reciprocation for the one that she could never solve, never bring to justice, Nora investigates, piecing together strange, half-overheard conversations, complicated relationships, eccentric local characters, and the relics of the not so distant past. Could the killer still be at large, still be living in the community? Was the murderer seeking justice, revenge, treasure, or something else? Why the triple death and who would know about such a thing, much less how to execute it in the ancient tradition. Does this tie into the unsettling rumors of animal torture and Satanism that arose years previously? Could Danny Brazil, a local kid working on the dig with a disturbed past, be somehow involved? What of Ursula Downes, Cormac’s old lover and now head archeologist for the gristly site. Has she taunted the wrong person too often? Have her games come back for revelation? What does she know of these triple deaths and what does her discomfiting presence intimate: more ill-fated love affairs or a scheme involving something far darker? What of Brona Scully, a woman who hasn’t talked  in years yet remains ever vigilant, ever present, always hiding somewhere in the foliage. Why is disturbed archeology student Rachel Briscoe with her knife tracked arms wondering the moors at night and who is she spying on – what horrifying past knowledge does her fevered brain contain?

When bloody deaths begin to disturb the peace of this rural, cast-back-in-time town, Nora fears that not only has she failed again, but she has opened a terrible Pandora ’s Box which cannot be closed. When taunts begin to appear, Nora realizes that the killer’s vendetta has extended to her meddling and with Cormac suddenly accused of murder, the true killer reveals his ultimate weapon and most dire intention.

Following in the wake of Haunted Ground, the second addition to the Nora Gavin Series, Lake of Sorrows, is an atmospheric, almost other-worldly read capturing all of the brilliancy of the first book while adding a deepened flair for the poignantly tragic and the eerily isolated. Fraught with an obsessively heavy atmosphere, the verdant foliage and moldering peat in the semi-solid, shifting world of a bog captivates both the reader’s fear and sense of adventure. The secrets that a bog holds are both terrible and beautiful, the clues to ancient life strange and simultaneously comforting, in that something has remained, has survived all that vast expansive of oppressive time. Nora’s own mental turmoil, brought to a breaking point in Lake of Sorrows combined with her complicated relationship with Cormac demands empathy and anger from the audience. We are both frustrated and engaged, believing in the realism of these horrible mistakes, watching with a complete inability to stop them, reflecting along with Gavin as she looks over the rubble of previous lives that some things can never be undone, some things never known, and others simply lost forever.

The characters are eccentric, brightly luminous and yet dark, hidden with a secret power, eons old. Hart has a way of merging present day with the inky occult lure of a ritualistic and shrouded past. This has the strange effect of making the book cozy, utilizing a grey-skies rainy-day macabre-ness, and bittersweet. The past here still feels vital and living, palpitating just underneath the surface, roiling the watery flatness of a seemingly solid, dry bog. Too many of these novels, back to back, would undoubtedly just be too depressing yet one as a centerpiece in the reading list, surrounded by some lighter selections and some beach reads, is simply irresistible, dire and so addictive that we just feel the need to keep returning, to keep attending these grim autopsies because we too want to know the past, want to feel it and touch it and affirm that all things do not cease to appear forever.

The character list here is pretty formidable, the intricacies of each person’s life brandished with a stunning vibrancy. We feel these people, these suspects, and each of them gives us a reason to be terrified, to wonder, to worry over long nights. Red herrings keep the plot twisting and the who-dunnit strong while also building the suspects into real, flesh and blood characters with their own compelling histories.

Nora and Cormac’s situation is sad and while I am not one for relationship drama in my mystery series, Hart managed to employ the emotional turmoil engendered by this circumstance to further deepen our understanding of the protagonists and our agony at their decisions, false illusions, and unrealistic ideals. It hurts to see the characters not do what we want – what we know they need – and this pain seems to have effected many readers’ enjoyment. Yet – if such a strong reaction can be elicited, is this not a sign of a good book, of vivid characters, of a beautiful pain that transcends pages and is brought alive by the wail for attention inherent in all art, particularly writing.

The actual killer and the solution to the staggered murders and the symbolic ritualism is difficult to figure out despite the subtle clues that become so evident after the final reveal. This makes the  conclusion both shocking and yet somehow inevitable, satisfying in the way that once there, we realize that this is where we should always have been, the clear path laid early on that we did not follow. Throwing in other bog finds and ancient treasure allows the narrative to end with a clinching image that stays conjured and vividly horrible long after the last page fades into echoes.

Despite already having a hardcover version of Lake of Sorrows, which has been sitting on my bookshelf for years now, I ended up listening to the fantastic audio edition read by Jennifer McMahon.  McMahon’s Irish accent and intuitive understanding of the way things are said and expressed in this world is just too addictive to miss. After encountering Haunted Ground in audiobook format, I knew that I had to continue this vibrant tale with the voice of McMahon bringing the place of rural Ireland and all of its hardworking denizens alive.