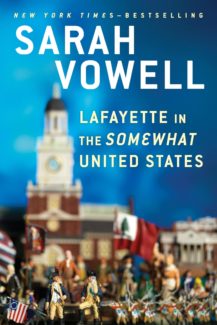 My first stint with Book of the Month resulted in a free copy of Lafayette in the Somewhat United States, a history tome rumored to be all snark and entertainment. Several years later, after having gathered some dust on my shelves, I decided it just looked too forlorn and it was time for this decidedly fiction loving, generally history averse (I’m sorry, facts have a certain dryness, don’t they) bookworm to get back to the languishing part of her epic collection. 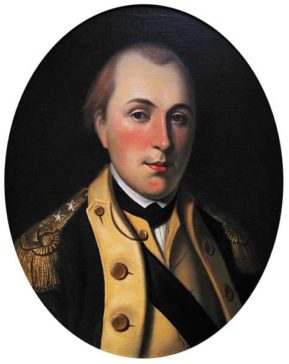 And so, it was with less relish and more sense of duty that I approached Sarah Vowell, a historian who disses the usual tropes of appendices and cited facts. Vowell, indeed, is known more for her everyman, colloquial approach to all things history and it’s somewhere here that artifice and brilliance mix.

As some of us know – admittedly mostly from Hamilton – Lafayette was a young French general who sailed the big seas at the tender age of 19, abandoning his pregnant wife to hit up the newly revolting Americas and join the Revolutionary War. Sailing around with such figures as Hamilton and George Washington, this rebellious marquis has a big part in the history of our freedom as a nation, as does indeed his home nation of France. For the historians and generally more woke out there, this comes as no surprise. For the rest of us, Vowell’s tongue-and-cheek history is an eye opener. Without France, there would certainly be no USA as we know it, yet Lafayette, whose ghost lives on mostly through Hamilton tunes and the dizzying array of weird layouts in Washington DC, was so much more to our inherited history than we realize.

Of course, unlike Hamilton, Lafayette in the Somewhat United States has no sense of glamor, although Vowell is all about the gratitude. Our snarky narrator, who seems fonder of quoting reenactors than other historians and going off on tangents about Quakers and War and battle layouts, is quick to hit on the points that history would like to forget, freedom fries and all. Lafayette is both hero and idealistic youth who ultimately ignores the failings of his own country (for example, Louis XVI will regret donating so much to the Americas only to be later guillotined by his own starving people). Lafayette is both brilliant and so in over his head, the hubris of his youth and position more responsible for his lucking out than his courage or cunning. 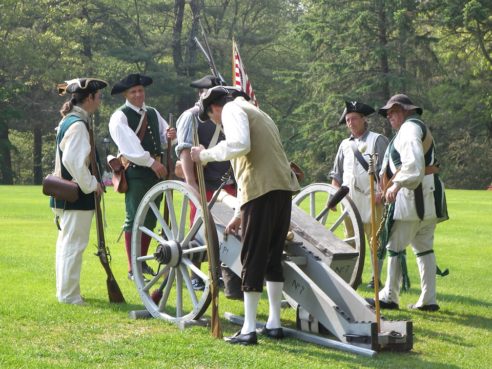 And yet, with all that’s to be said about Lafayette, he feels somewhat tangential, as does the entire mismatched narrative. We start straight enough, but as the story goes, Vowell alternates between spending some time lingering unnecessarily on insignificant moments only to fast forwarding rapidly through other far more important events. Is this a story of a young French boy turned hero, then forgotten eventually by the very nation he staked honor and life on? The story of the revolution and how the final battles, and the poor luck of the British, lead to modern times? A story of various different reenactors talking about what they never lived but like to invoke? Lafayette fades as the book goes on and as Vowell starts to journey in real time around battle fields. Soon Lafayette becomes a bookended sort of figure at the conclusion.

And so the book becomes meandering, something that is apparently Vowell’s trademark style.  It’s more like an essay with a stream of consciousness bent, the beginning heavy with setup and the details disappearing as this long ago war starts to get kicking. Vowell hides much of this with her voice but at times the sarcasm is cloying, although the parallels – division then as now – help to tie these two disparate times together. It’s a good read, but certainly not one that will convert the non-historian into a sudden seeker of facts and figures. A historian, him or herself, would likewise not be overly impressed with the lack of focus and those pesky missing indices, making the final audience for this book some sort of hybrid reader who oscillates between seriousness and play.