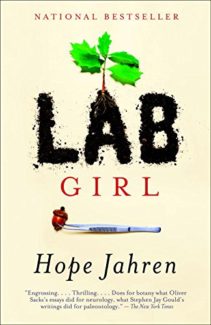 Despite being a hardcore English major personality (and consequentially, a book nerd), I’ve always had a yen for the awe inspiring breadth and curiosity inherent within science. As a child, I was so devoted to reading science text books and watching nature shows that I planned to grow-up and be a scientist of some sort. Even in college, I briefly flirted with the idea of adding a biology minor to my overfull schedule. Yet ultimately, the math drove me away and while I maintain a deep love of science, I chose to run with the bookish side instead. So, when Lab Girl, an acclaimed bestseller telling the mellifluous stories of plants and a hard working woman who became a scientist against all odds, I knew that I had to read it. Indeed, I was one of the advocates who got it voted into my book club’s rotation. So, with so much anticipation, I dove into the admittedly strong beginning detailing the dreams of a child who grew up with a reticent family but ultimately found magic by playing in her father’s lab.

Lab Girl is part memoir, part treaties on the intricacies of botanical life. The chapters interweave with pure science being offset by details of Jahren’s life which for the most part is told chronologically. We begin, first, with the voice of Jahren who is both a precocious and oddly detached child. Her parents are withdrawn, remote in what can only be defined as a Swedish stiff-upper lip,  and we sense a lifelong yearning for more – an emotional need that hums in the background throughout the book yet is never truly addressed or dealt with. Within this isolated world, however, Jahren discovers the love of science, spending her playtime in her father’s laboratory and romanticizing the scent of chemicals and chugging of complicated machinery until the readers too view this world through a shimmer of possibility and realized hope. This essence also stays throughout the narrative and even draws us non-scientists into what the world must feel like – the fulfilling moments of both discovery and daily monotony. This intense feeling of love remains adamant throughout Lab Girl and allows even the most detached reader to see a glimpse into the world of scientists.

As Lab Girl goes on we get interesting, enthusiastic details on everything from plant promulgation to soil levels, colors, and meanings. Readers’ levels of intrigue will vary with these chapters and while I enjoyed them, I also didn’t find myself seeking out the information in particular or remembering it in-depth. There were a lot of “ah, wow, so that’s how that works” or, “huh, I had no idea that they needed this kind of detail for even the most minor questions,” and some general “oh, cool!” statements, but none of it exceptionally memorable. This isn’t the glamorous Michael Crichton science (no wayward nanoparticles or reengineering of extinct animals) meaning that what you get out of the discourse is directly comparable to your own level of interest in the topic. Soil samples and variations – interesting, unique even – ultimately not high on my list though.

Where Lab Girl is disappointing, to me, is within the personal element which so many seem to like. Sometimes, Jahren’s vulnerabilities and fears are compelling, establishing a bond between the reader and the actual woman. Many times, however, there is a deliberate holding back and at other junctures, a moment where you as the reader wish the author had held back. Ultimately, Jahren and her lab assistant/platonic soulmate, Bill, just aren’t that likeable or relatable. Let me break it down.

Firstly, there’s a lot of hoo-ha about Jahren being a female scientist, especially since she started this endeavor “back-in-the-day” when the very idea of a woman scientist was not only eccentric, but downright unheard of. Jahren seems to know that we, as an audience, are ready for an empowering, overcoming story. We don’t get it though. Jahren makes peripheral mention of her difficulties and the inherent chauvinism of an all-male field, briefly, but the text remains mostly sanitized, giving readers the opinion that 1) she doesn’t want to share with us or 2) her story was neither interesting, difficult, nor empowering. This isn’t the only time that Jahren holds out on us, making her audience feel generally distrusted. She mentions at some junctures mental issues for both herself and Bill, yet she doesn’t share much here either. We don’t even really know what the issues are and we want to – we want to sympathize and we want to learn how she overcame her own mind turning against her and what this cost and what, if anything, she gained. But again – nope. Ditto to her eventual romance and seemingly overnight marriage. We hear her longing and occasional whining about her forever single state and so we presume that when she meets someone and gets married, it will be a big deal and we’ll be in on all the juicy details. . . do I even have to say that we didn’t get any satisfaction here either?

While Jahren’s moments of reticence keep us at arm’s length, and make us wish for a closer relationship with the author, what she does reveal, or at least chooses to let us see, makes us not like her very much. Both Jahren and Bill are the stereotypical mad scientist types and we get plenty of details regarding low hygiene, un-capped bottles full of urine in cars for long road-trips (you pretty much know that a flip-over is coming when you hear that), a cat uncaringly run-over by Bill and Jahren (mentioned as a side addendum like people just do this all the time), thievery of supplies others needed that they did not (i.e. stealing for the hell of it), and worst of all a superior and derogatory attitude towards everyone outside the Bill and Jahren click, including grad students.

Let’s follow-up on that last item a bit more. Jahren and Bill, evidently, are horrible teachers and generally bad planners who find their last minute slovenliness and disrespect of everything from learning events to lectures they’re supposed to deliver unworthy of their time. Apparently, the readers of Lab Girl are supposed to chuckle along.

Students are useless if they can’t and don’t participate in the driving (ummm, aren’t they already paying ridiculous sums to learn) and they are thoroughly scorned. I won’t even get into the story where a student gets upbraided for a car accident that Jahren’s and Bill’s horrific planning and bad instruction cause, nor how they refuse to let this student just go home. Students are mere appendages to be used and abused in Jahren and Bill’s own research and while some of their comments are spot-on (and even funny) many are petty and mean and show discontented personalities who just can’t seem to jive with the rest of the human race in general, and potential competitors in particular.

That’s not to say that Jahren and Bill don’t have their good points and their loyalties (their own weird bond is one that remains especially strong and the entire book itself is essentially a love note to Bill) yet I just didn’t like them. The holding back combined with the “I’m better than you” view of the students left me feeling like I was watching a clique from the outside, and allowed to do so, so long as I understood that I could never, ever join. In the end, the personal element ruins Lab Girl. If only it were just the beauty of science and the extraordinary nature of plants and Jahren’s addictive love of both instead of a bitch-fest dedicated to a flawed and seemingly bitter friendship.