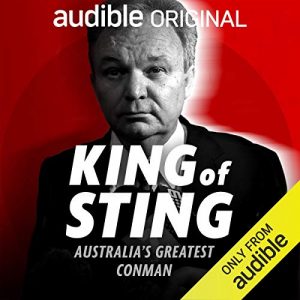 I am back-at it with my freebie Audible true-crime podcasts. King of Sting was a new kind of listen for me. I’m going to be honest, and sound unintelligent while doing so, but white collar crime, specifically money crime, confuses and bores me. I debated on downloading this one for that reason. It may be all James Bond high-flying shenanigans to everyone else, but I am usually left in the dark saying, “wait, break down everything he just did and the math and how that worked – again.” But, as I said, it’s free and the Audible podcasts are always fun, if not perfect.

It starts with Peter Foster, an Australian con man, and a recorded phone call where he is telling his associate that he wants a man killed. Sounds promising.  We meet the Podcaster, Justin Armsden, a reporter who has followed Foster for over two decades, trying to stop his crimes. Instead, Armsden is left to cover the after effects – namely the broken women tricked in each of Foster’s clever campaigns, many of which revolve around fake products and supposed payoffs.

So, was I wrong about my “huh, I’m so lost” assumption as the money flows and the cons begin? Nope. Not at all. I still don’t fully understand how some of the schemes work, although I was able to follow many. This is less because of the math and more because of the rapidity of the story and the timeline play. We begin at the end (sort of, almost, but not really) and then go back and forth in time. Names change rapidly, one scheme is a mimic of an older one, and the audio quality of many of the interviews is bad. It’s difficult to follow in places and requires a certain dedication. But beware, there is no pay-off. Foster remains on the loose, and while there is an evident cry for justice from the narrator, the arc of the telling falls flat.

King of Sting is typical of the Audible free podcast series. Worth a listen, entertaining, but not great.