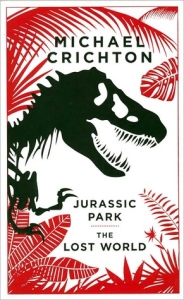 Jurassic Park: the classic, original novel which is definitely not for kids

I saw Jurassic Park for the first time as a very little girl in a surprisingly large barge of a car (for the 80s anyway) in one of the last drive-in theaters around Memphis. It was storming that night, and I still remember screaming and looking out the back window for raging dinosaurs during the T-Rex’s escape scene. Since then, the dinosaur infatuation only grew and my room as a child was filled with the requisite Barbie dolls . . . who were always eaten and attacked by my mammoth dinosaur, left in mauled heaps. Later, in high school, I discovered that my beloved movie franchise was based on the bestselling book, originally written by Michael Crichton. I purchased the book and as the fall slid into winter, my school days were instead subsumed by a tale far darker and more penetrating than I could have imagined. My addiction and immersion in the novel was half painful, half beautiful capturing my imagination and making my non-reading time an excruciating departure. Finishing the novel hurt since I knew that the feeling of addiction to this unpredictable, vibrant world was over. Following it with Lost World . . . well, that was just cruel. Occasionally, seeking the original sensation of a great read and the nostalgia of a childhood favorite brought forward into the adult world, I’d have a marathon of the first three movies either as a comfort routine or, ok, ok, because I still loved dinosaurs.

All these years later as the excitement was growing for Jurassic World, I decided to revisit the novel that got me hooked on Michael Crichton and brought a rainy world complete with ferocious roaming dinos to life. And yeah, I had to do something given the fact that there is finally another Jurassic Park movie.

I could do the usual reviewer shtick and summarize the plot, you know, for all those people who haven’t already heard about the Jurassic Park idea (all, what, two of you?) The 1,500 odd reviews on Amazon alone, of course, aren’t equal to this task. So, here it is: man against science – just because we learn to do something, just because we can implement genetic powers we don’t understand, should we? Or, simplified to the layman’s version: genetically engineered dinosaurs eat helpless people stranded on an island designed to be a theme park.

Now, let’s get into the important stuff for those of you who grew up with these scaly critters. What does the book offer that the movies don’t? Is it better? Worse? Completely different (wait, that last one is Lost World, never mind). The answer is that the novel is better, astounding even; whereas the movie is memorable and cinematic, the novel contains the real gist of Jurassic Park – it sparks our imaginations, often to dark places. The movie itself, good and atmospheric enough to get an entire generation of squealing children into everything dinosaur, was only the tip of the iceberg. The novel does what no movie can – it brings the feelings of exhaustion, paranoia, and the atmosphere of combined wonder and terror into sharper relief against a landscape that is so well described we see its misty, dripping jungle leaves.

The element of science and the character of Ian Malcom (the chaos theory mathematician) add the distinctive Crichton punch that was mostly left out of the movies. The science and technology is quite fascinating and adds a level of intrigue to the reading. Let’s be honest, it makes us as readers feel smart, even though the concepts are boiled down and the science is, well, theoretical at best. I won’t mention the technology here (the excitement in one scene over a CD-ROM dates the narrative exceptionally, as does the Linux system they use.) Kodus on the Cray supercomputers though, which still mean something.

What do you get out of the book more than you can get munching on popcorn and watching a T-Rex eat a car? Well, more dinosaurs, more story, and some interesting changes/discrepancies between what was put on film and what the book actually says. For fans, it’s a fun little puzzle to see where the movie series got started and how it subtly changed items for the big screen. For instance, here’s a little teaser:

And so, so much more. It’s the Jurassic Park that we know, only more complex and explicated, allowing readers really to dive into the world.

Characterization isn’t Crichton’s strongest virtue, yet he excels in Jurassic Park; Grant, Ellie, Ian, Tim, Lex and others all come alive and we get to know them in the bonding moments of survival situations. The tension, the heart pumping action, and the downright terrifying scenes keep readers on the edges of their seats. A combination techno-thriller horror story, the real Jurassic Park might be a bit much for children, but it proves absolutely addictive to adults, bringing back our fear and fascination with these great, extinct beasts. Highly recommended for anyone who considers themselves a Jurassic Park fan or anyone who enjoys a riveting, high action novel with a high body count.